It is not very often that you find yourself giving chiropractic care to people in India, only to find that you are tucked away in the foothills of the Himalayas of Nepal two weeks later. Following our first chiropractic service trip in Delhi, we found ourselves trying to escape the smog-filled streets of Kathmandu to embark upon an epic backpacking mission into Nepal’s Khumbu region, home of the world’s tallest mountain range, including Mt. Everest, but also the region that was hit hardest in the devastating earthquakes in Nepal in the Spring of 2015. But before we could leave, we had to organize the details of our trip, obtain all the proper gear, arrange transportation to our drop-off point, and of course in between all of this catch a few essential city highlights. Our guesthouse was located in Kathmandhu’s Thamel Town, a very colorful tourist district that lures hoards of international budget backpackers into its orbit, densely packed with its plethora of souvenir shops, restaurants, travel agents, outdoor gear shops, and clothing stores lined closely on an array of narrow streets bound overhead by thousands of Tibetan prayer flags, reds, whites, blues, greens, and yellows, all waving in the wind. 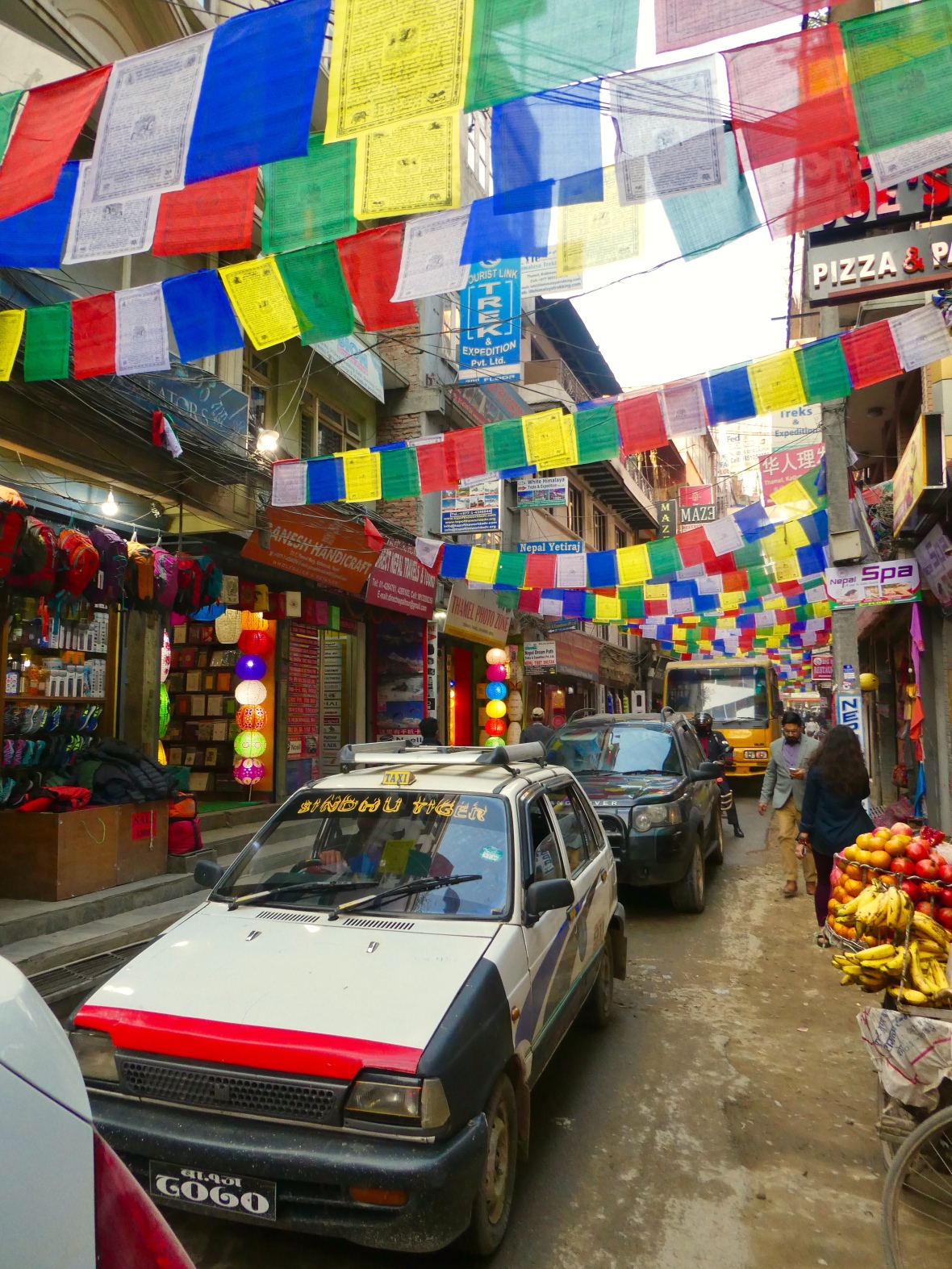 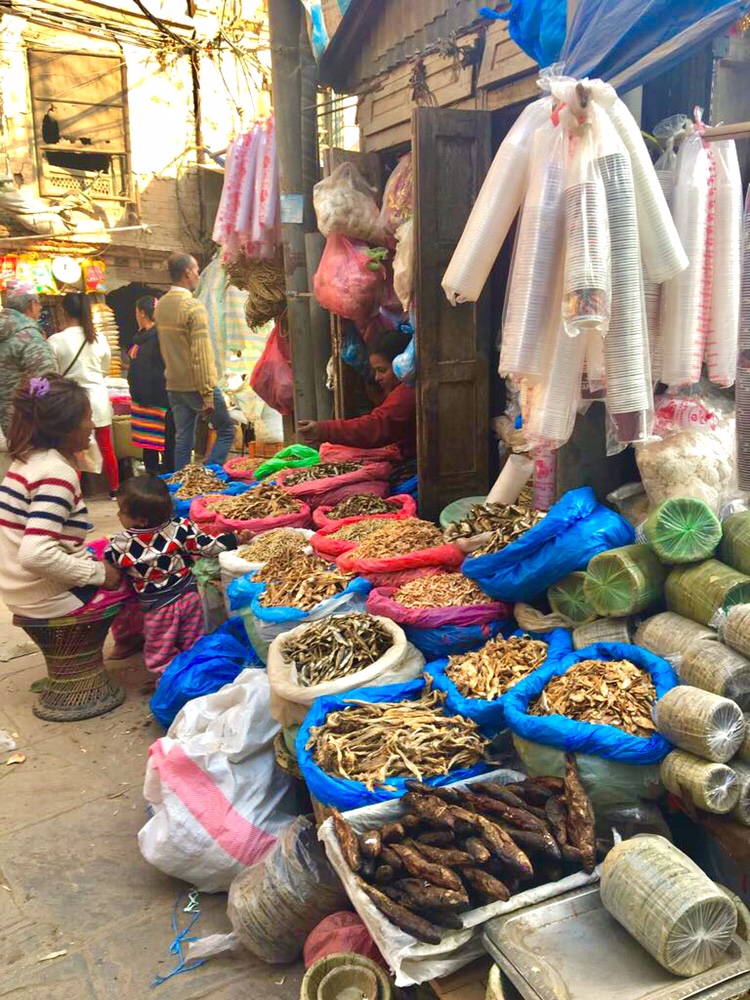 In those first few days, we would visit the Boudanath, Nepal’s largest Stupa, a Mecca for thousands of devout Buddhists to walk around while reciting their morning prayers during sunrise each day. 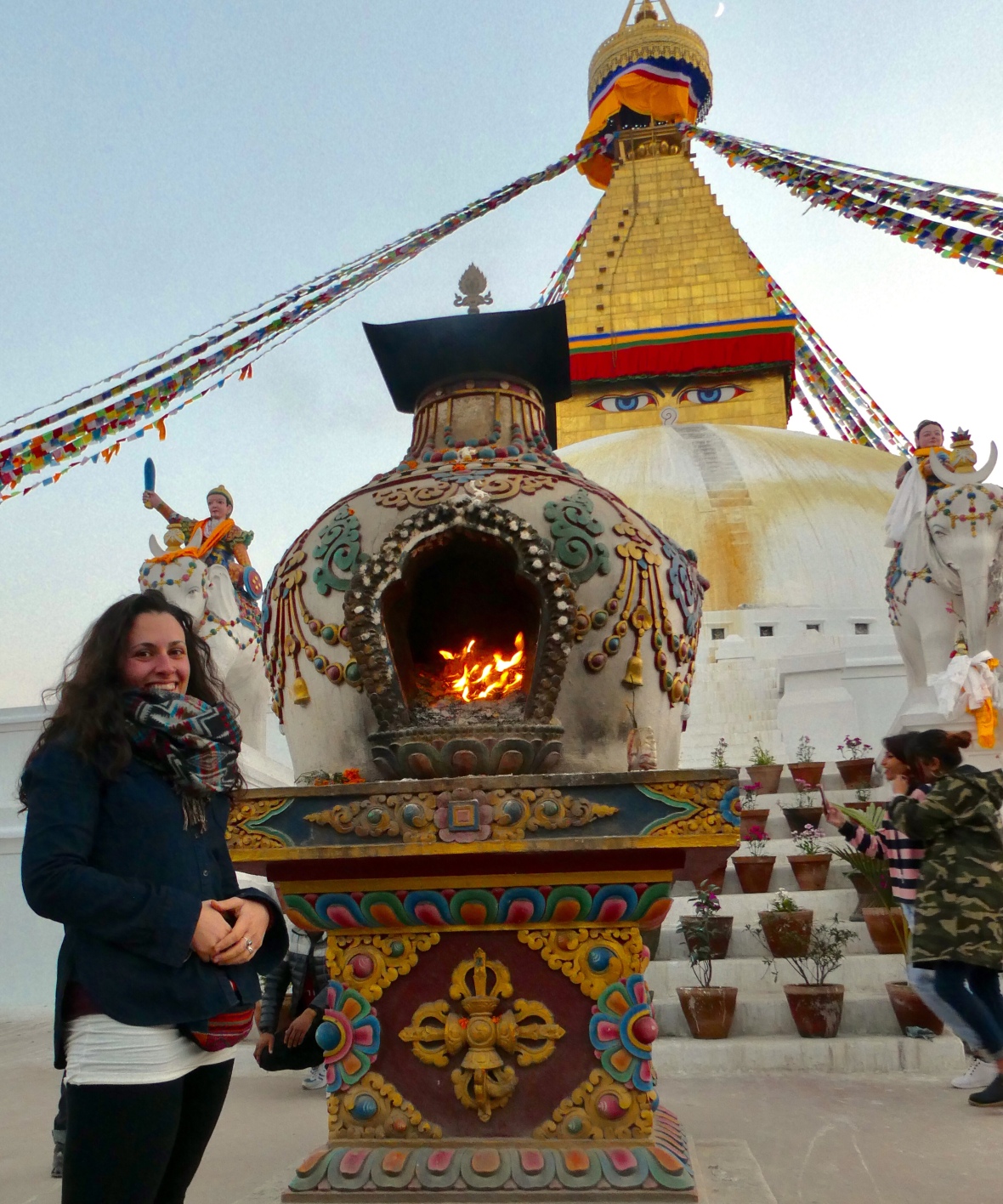 Not exactly the morning types, we of course, showed up before sunset when all the other tourists were there, but the site of this monolithic icon reflecting the golden rays of the setting sun was spectacular nonetheless. 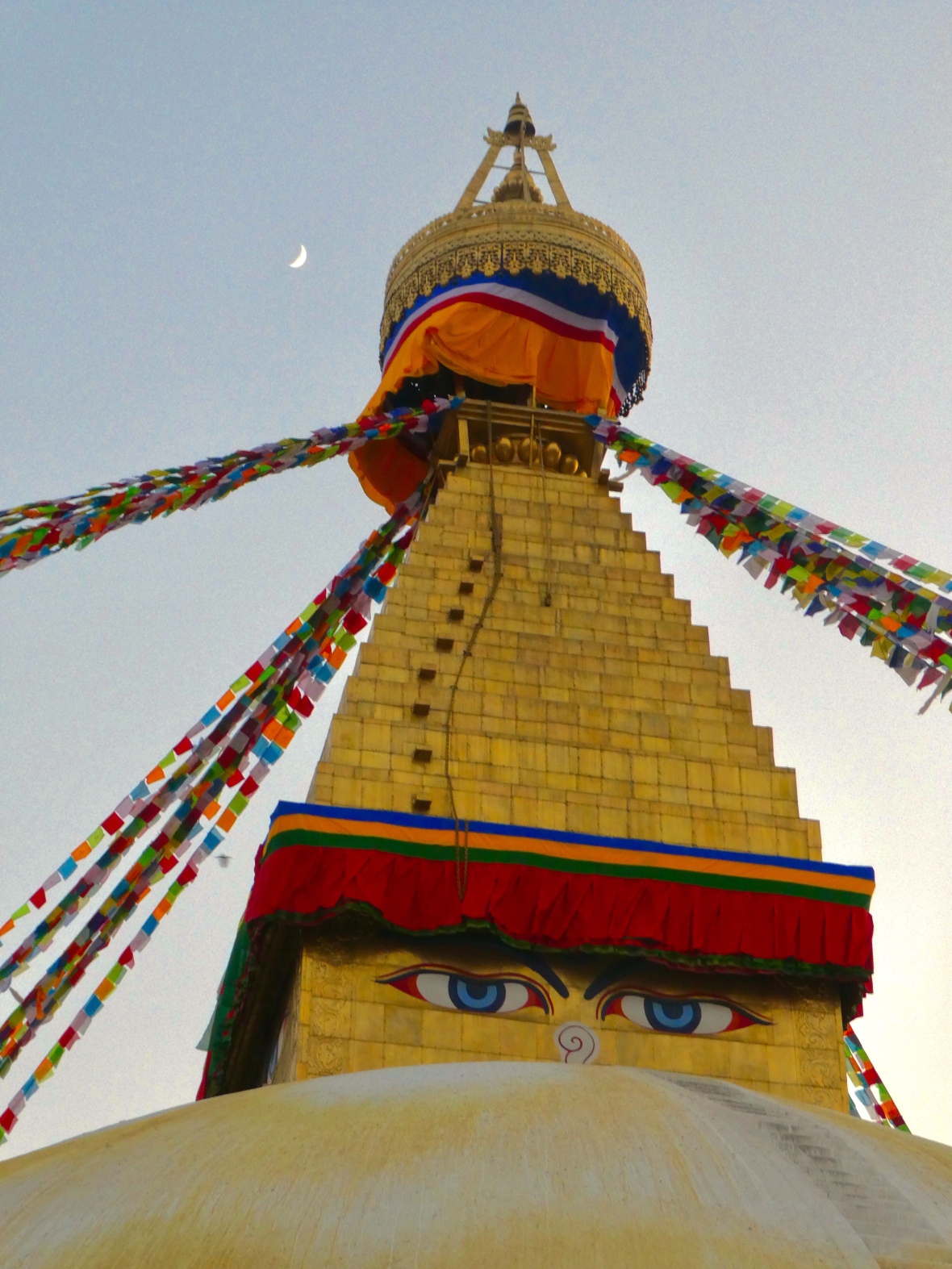 Just a few days before leaving Kathmandu, we took a walk across the city to the famous Monkey Temple, perched up high on a hill overlooking the city. We lost count of the all the steps we had to climb going upwards, however, we were greeted by the interaction of many monkeys along the way up, and were rewarded with fine views of sprawling Kathmandu at the top! 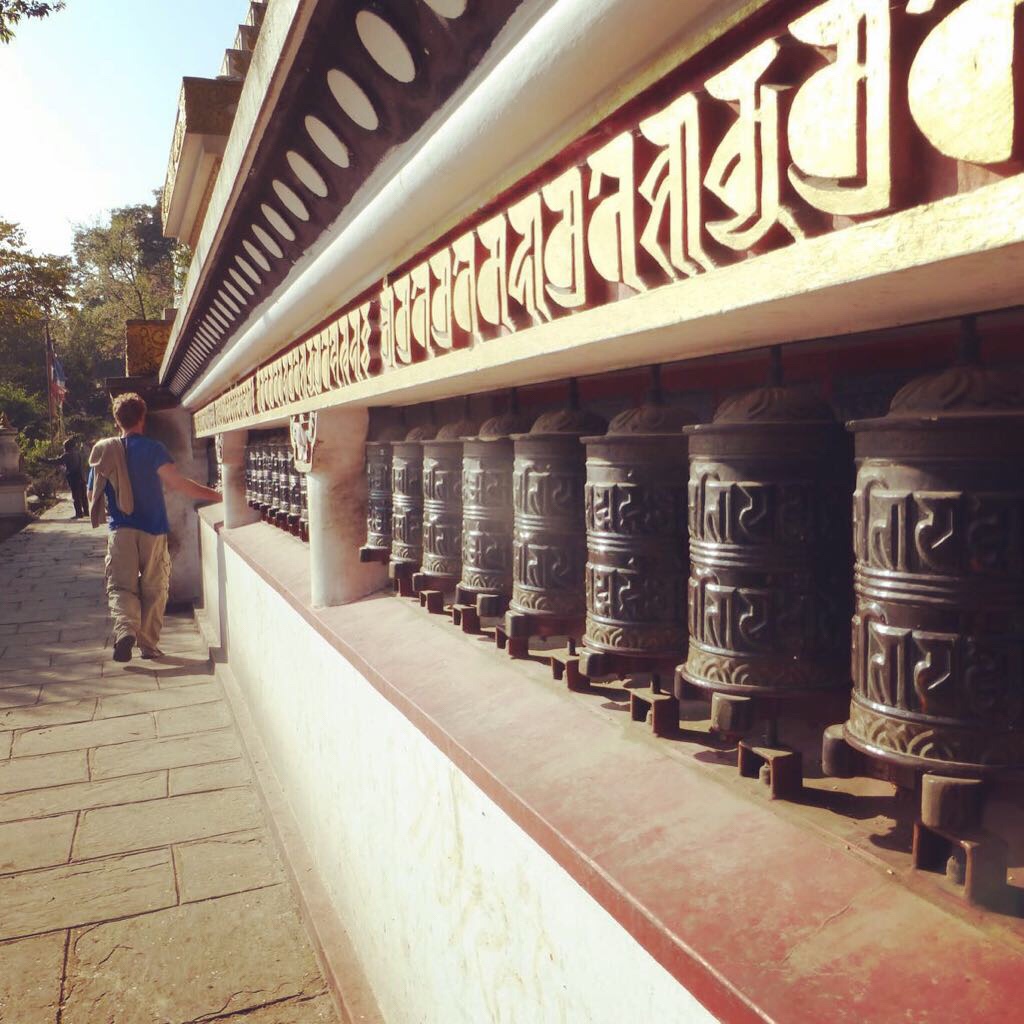 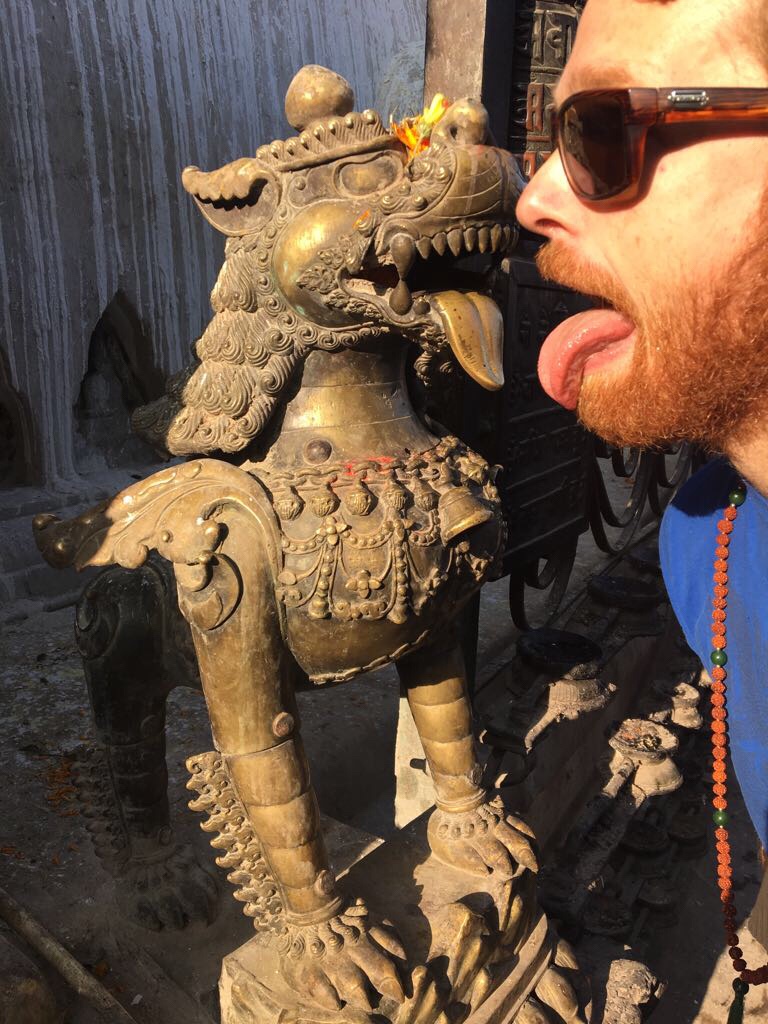 In an effort to dig our claws just a little deeper into the Nepalese culture than the average international Joe Trekker, who usually takes a small airplane from Kathmandu straight in to Lukla (a busy backpacking hamlet perched atop a hanging valley at about 2800 meters), we opted to take the local bus from Kathmandu to a small village called Shivalaya where we would begin our journey. From the time we left the station in Kathmandu at 7 AM, this bus trip gave a whole new meaning to what it can actually mean to take a bus trip, and it will without a doubt be the bus trip from which ALL future bus trips are measured. The traffic out of Kathmandu that morning makes Los Angeles seem like a place full of country roads. Parisian streets pale in comparison to the narrowness of the road we were on. And being a bus driver in Nepal is way more hardcore than being a fire fighter in California. I watched our young confident driver, with smooth dark skin and slicked back hair, sporting his cool aviator sunglasses, overtake vehicles left and right on roads so narrow that we should have fallen off the side or collided with another vehicle…MANY times, spitting out the window all day long and liberally taking phone calls while driving, and he never even stopped to pee once. I imagined many times, while clutching on to the seat in front of me for dear life on that 11 hour and 45 minute craziest, bumpiest, curviest, dustiest bus ride, just how comfortable Joe Trekker was, cruising at 35000 feet in his plane seat, touching down at his destination in slightly less than 35 minutes from when he took off in Kathmandu.

I wouldn’t have changed my decision for the world, but I must say I look forward to sitting next to Joe Trekker on that plane back to Kathmandu once our journey is complete. Our lungs dusted and our bodies sore, the bus, creeping along at many times slower than I ride my bicycle, while at other times speeding over the earthquake-ravaged uneven road like a small boat rocking and rolling in a stormy tempest, dropped us off well after dark at the very last stop in Shivalaya, where we checked ourselves into a modest teahouse and, very relieved, passed out into our beds. I hope I don’t get bus ride nightmares now. 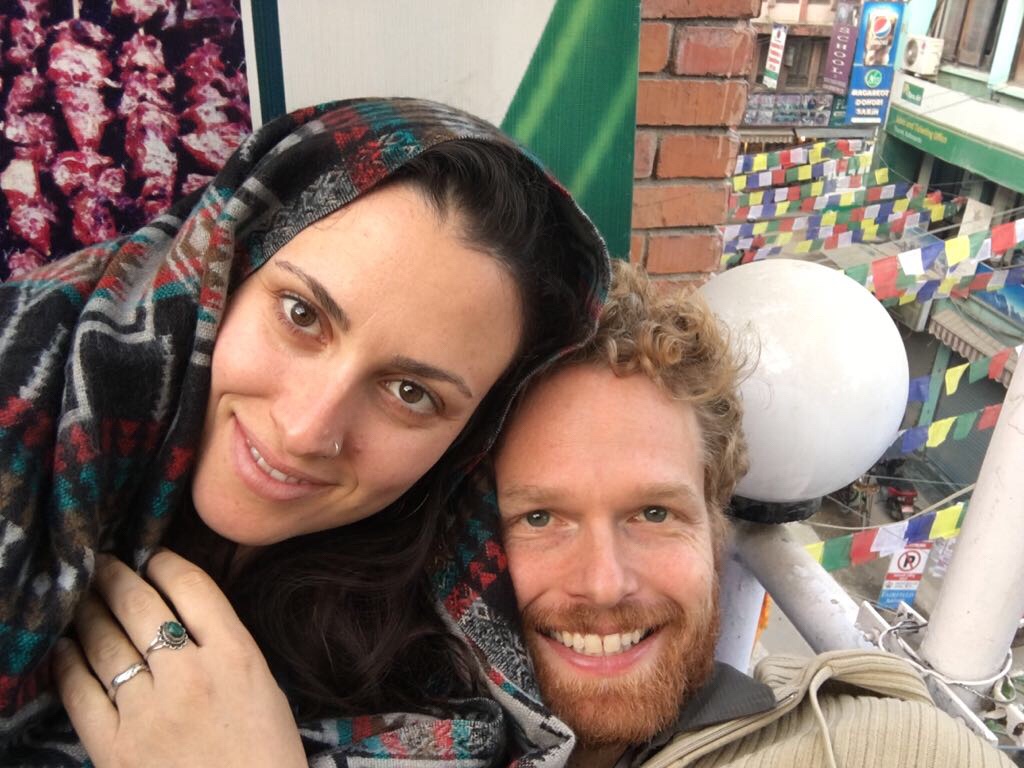 8 thoughts on “Kathmandu and the Worst Bus Ride”