We just arrived back in India, and already, she is pushing us to surrender to her flow and remember how to ride the wave of her perfectly organized chaos. The twenty-four hour journey we embarked upon in order to arrive in Dehradun, our final destination, is definitely one for the books. After flying in from a month of running around the Himalayan mountains in Nepal, we awoke in Delhi ready to get out of the big city and move on to the next part in our series of chiropractic mission trips in Dehradun, Uttarakhand. Located in the foothills of the Himalayan mountains, Dehradun is a smaller city of about half a million people, approximately a seven hour bus ride north of Delhi. We made sure to purchase our bus tickets weeks in advance, thinking that we were being responsible for planning ahead. With two hours to spare, we jumped in our cab and began the long drive across Delhi to the bus station listed on our ticket. (Keep in mind that there are hundreds of bus stations scattered throughout Delhi, most of which are not clearly labeled.) The horrendous traffic in Delhi was only adding to the mayhem of our day and we arrived in the neighborhood of our bus station with just minutes to spare. As we watched our progression on the amazing “maps.me” app, our driver pulled over to the side of a random street about two kilometers from our bus stop, telling us that we had arrived at our destination. As the minutes ticked down, we pleaded with our driver, who didn’t understand a lick of English, to follow our GPS instead of his own, which circled us around town heading to the main bus terminal. By the time the driver dropped us at a location that looked like it might be a bus station, but perhaps not our bus station, it was almost noon. Our bus was scheduled to leave at 11am. Fingers crossed, we made our way up to the bus stand asking for Dehradun, and were instantly seated on a local bus, no questions asked. We showed them our tickets and to our surprise, they wrote down our ticket information, informed us we were on the correct bus and left us alone. Thanking our graces, we settled in for the windy seven hour ride to our destination of Dehradun.

The ride was going smoothly enough until we reached Roorky, a city about three hours away from Dehradun. All of a sudden, the bus pulled over to the side of the road and almost everyone disembarked. Within seconds, a muffled shouting commenced at the back of the bus, steadily growing in volume and eventually persuading me to go and check it out for myself. I walked down the steps of the bus only to find that we’ve pulled right up to a large ditch (maybe the city’s sewer system?) that was about three feet across and about five feet deep and filled with disgusting sewer water—not exactly something you want to fall into! The only way to get off the bus now is to leap across the ditch to a ledge about a foot wide in front of a wall on the other side, shimmy all the way down the ledge, pinned against the wall, to the back of the bus and leap back over to the other side—-a true test of agility. (I am very grateful for all my years of dance and gymnastics.) After listening to the shouting in the back of the bus for some time and speaking with a few disgruntled passengers, I concluded that the bus was running three hours behind schedule, and the apparently quite dishonest busdrivers were only ever taking us to Haridwar, a city two hours south of Dehradun, while charging everyone the full fare. After deflecting countless passenger complaints, the police got involved and decided to confiscate the bus, leaving us completely stranded in the middle of a busy street in the random town of Roorky, about three hours away from our final destination.

The sky was now beginning to darken and we were becoming a bit apprehensive about arriving in Dehradun so late with no place to stay. Luckily, there was a very nice Indian woman traveling with her young son who offered to lead us to a second bus heading to Haridwar, her final destination. 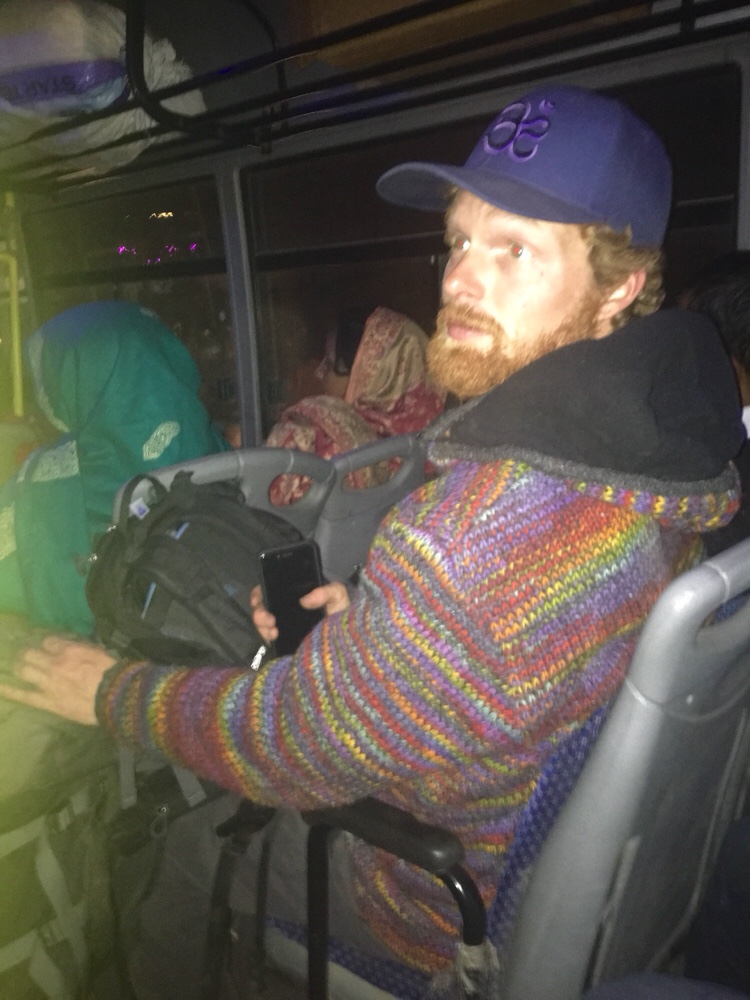 We took her suggestion that we stay in the holy city of Haridwar for the night and then catch a third bus to Dehradun in the morning when it was light out.

Just as we were about to exit the second bus in Haridwar, inevitably about to get bombarded by hoards of Indian men outside trying to sell us anything from a porter to carry our bags to a ride to a hotel of their choice, a young Indian man named Sadhev who had been sitting in front of us on the bus turned and offered us the most brilliant smiling mustache with promise of a decent hotel for the night. It turned out that he travels to Haridwar often for business and knows the area very well. He wanted to help us get a fair price and protect us from gettings bombarded by the locals trying to make a buck off of us. On a hunch to trust the guy, we followed Sadhev through the crazy maze of the city’s night traffic and down a few meandering side lanes to his hotel, which proved to be quiet, clean and comfortable. 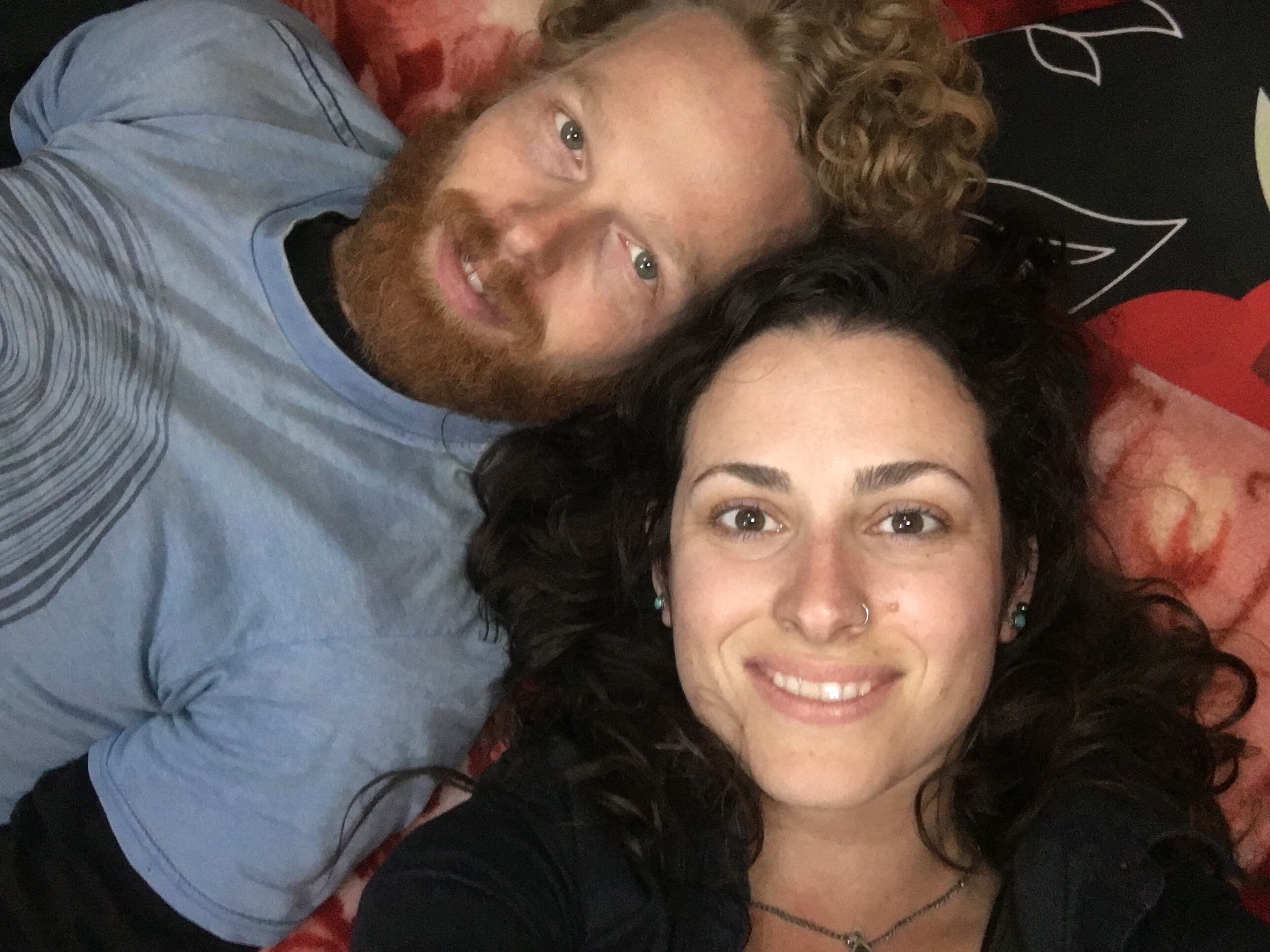 After a few minutes of getting settled in our room at the hotel, 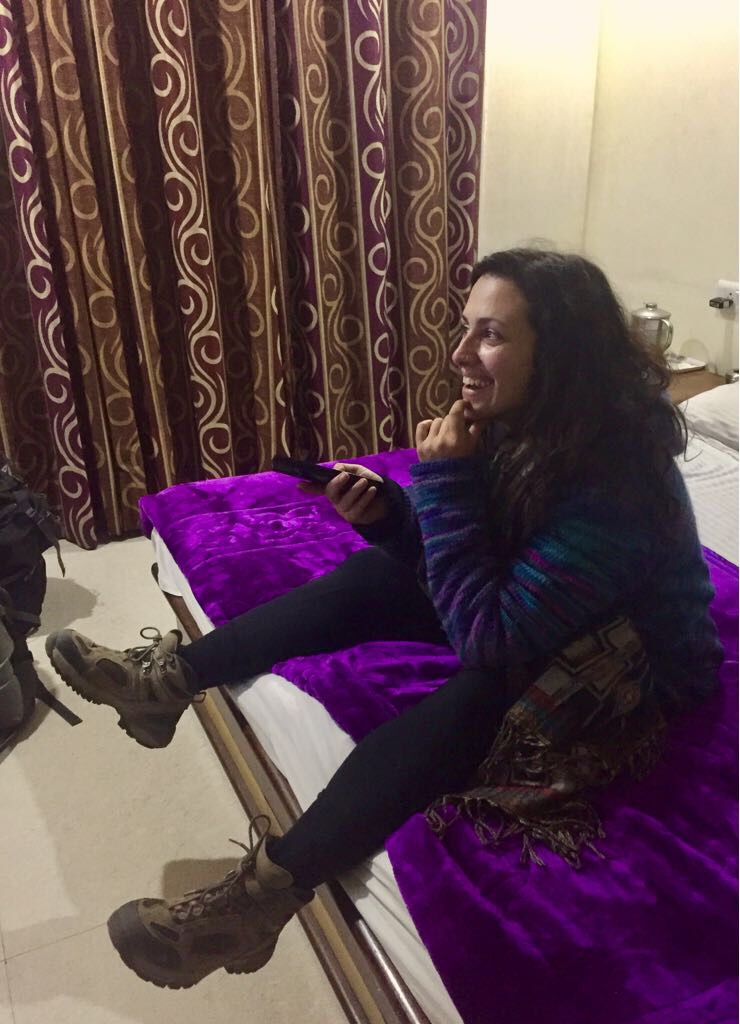 there was a knock on the door, and our new friend Sadhev popped his head in and asks “tea?” Although we were extremely exhausted, we couldn’t pass up the chance to explore with a local and head out for what turns out to be one of the most rewarding of adventures with Sadhev and his friend and roommate, Sanjay.

Our new friends led us through the busy streets to a giant local market selling everything from the most delicious fried foods to housewares and local goods to clothing and jewelry. The market spread along many branching streets creating a maze of colors and smells as we wound our way through, dodging fruit carts, running children and a variety of different animals along the way. Thousands of people were out and about, eating, socializing, and shopping. The lively buzz of the market was high, tickling all of senses as we took it all in, lifting us right out of our “long day of traveling” haze. As we exited the market on the other side, we came out into a large temple area built right on the side of the raging Ganges river, giving us our first view and introduction to the holiest river in all of India. There was a large network of bridges and multiple ghats with large steps leading down to the water lining the river on both sides. Hundreds of people were crowding the river in every direction, praying, bathing, crying and waiting to be enlightened by the healing waters of the great river. On the other side of the river stood a giant statue of Shiva, the destroyer of evil. 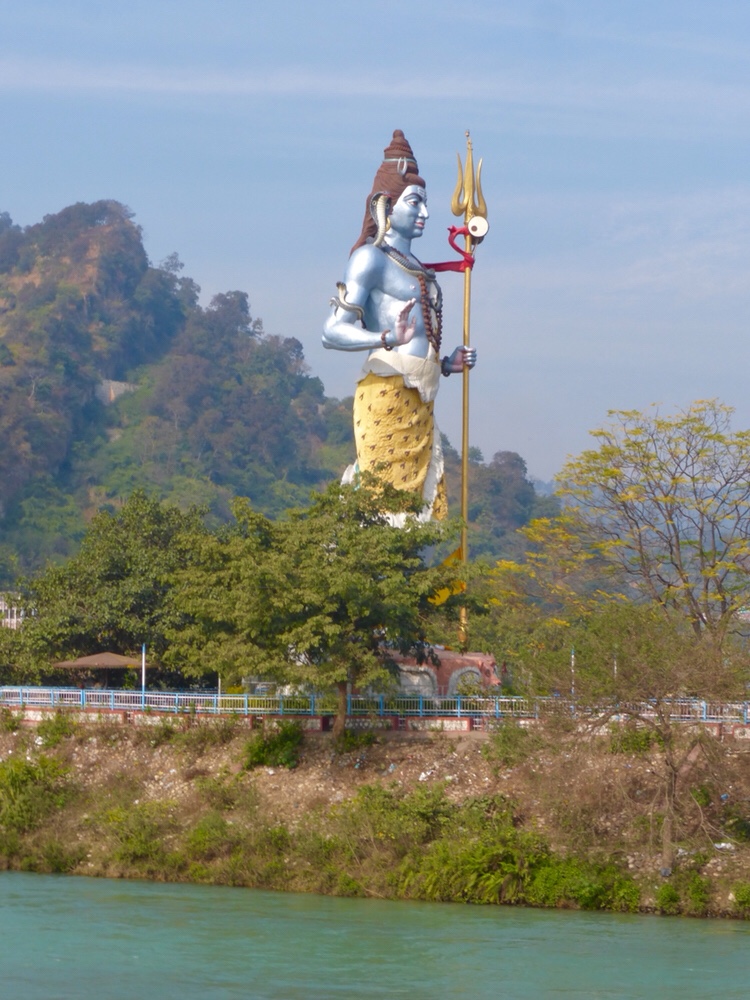 We spent some time walking around and exploring 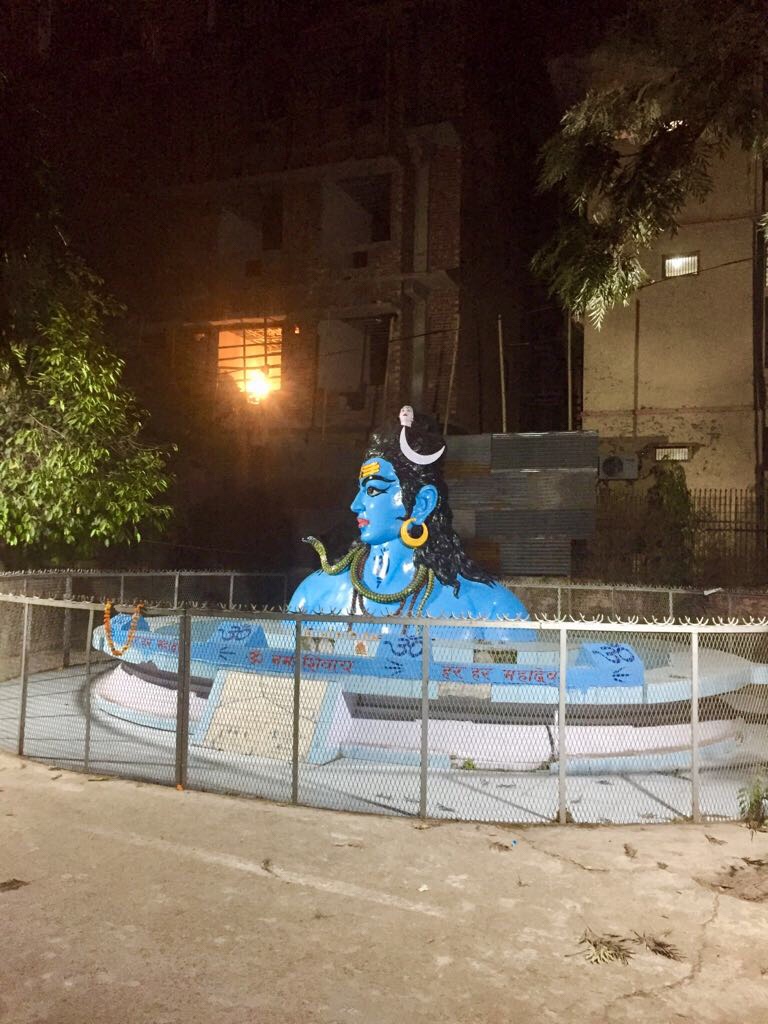 and even got the chance to dip our hands in the cold, refreshing waters of the holy Ganga.

After all the walking and spiritual cleansing, our hunger had built up quite ferociously, prompting our new friends to inform us that we must try the local Gudrathi food from their native place in India. Sadhev and Sanjay proceeded to lead us up the stairs and down the hall of a random shop on the side of the street, something we never would have stumbled upon ourselves. As we entered through a small door on the far side of the building, the room opened up into a noisy, crowded neighborhood eatery, filled with locals coming in for the best dinner in town. We sat down at a corner booth and were immediately brought silver cups and plates that were instantly filled with a variety of dishes brought in turn to the table throughout the entirety of the meal. The cups were filled with an endless supply of fresh buttermilk, and a few different salads and sauces were also left on the table. 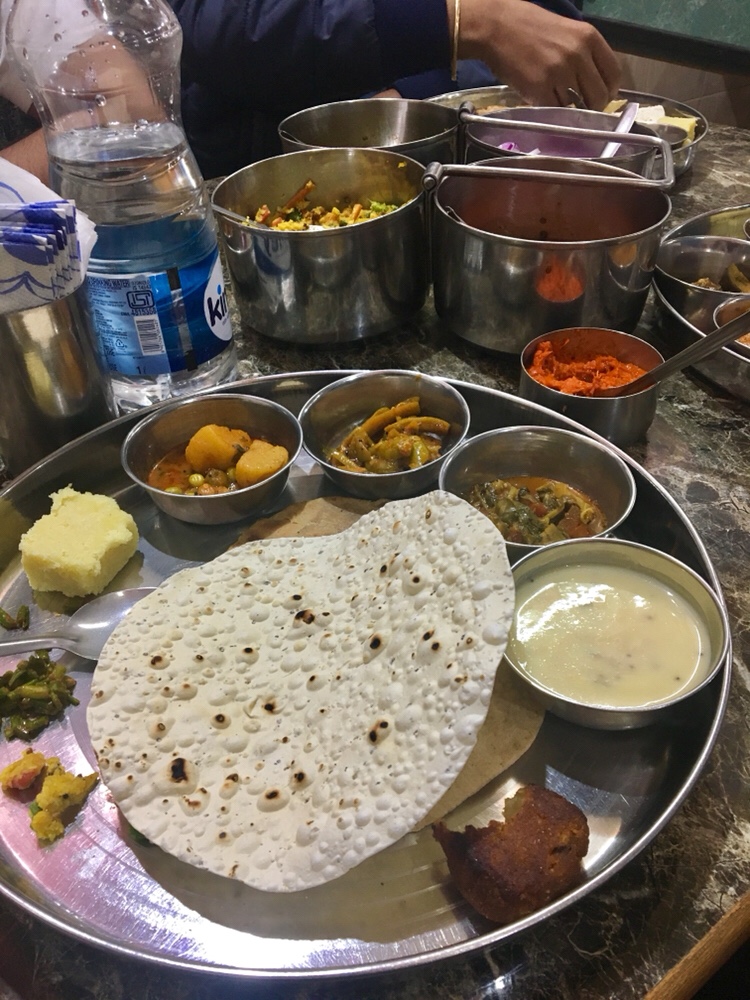 The flavors and colors were indescribable. Each dish had its own unique taste and spice. In addition, three different types of bread were offered as well as squares of dried coconut meant for clearing the palette and easing the spicyness of some dishes. Needless to say we were in awe, this was unlike any other dining experience either of us had ever had. 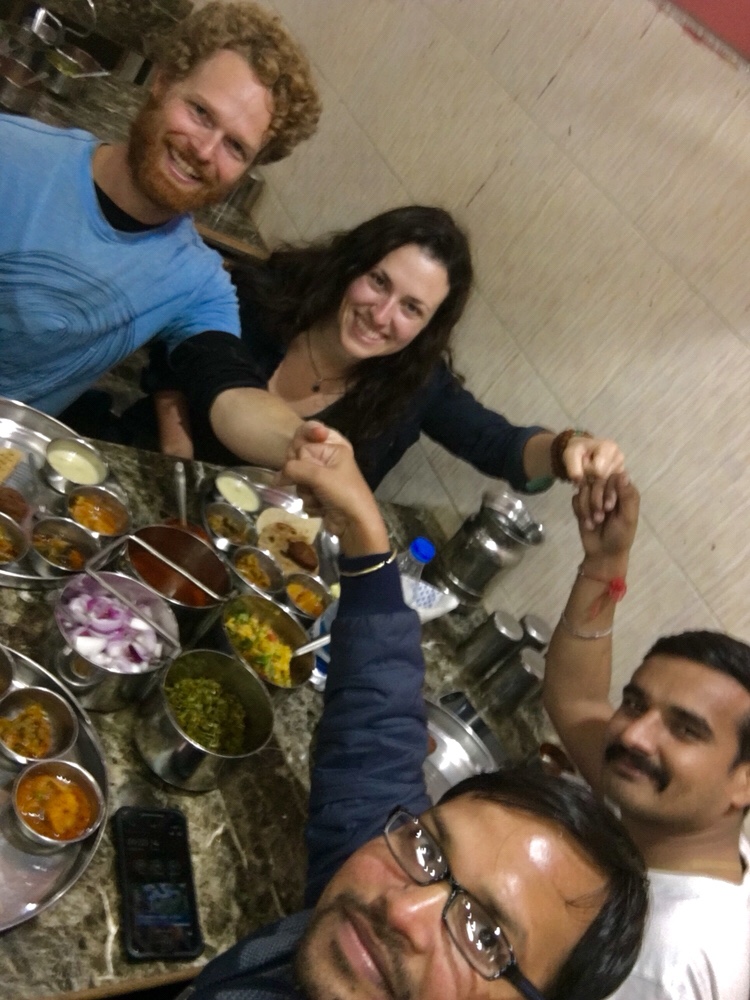 The conveyer belt of dishes didn’t end until the owner of the restaurant came by to make sure that we were happy and full, a true understatement of our experience. 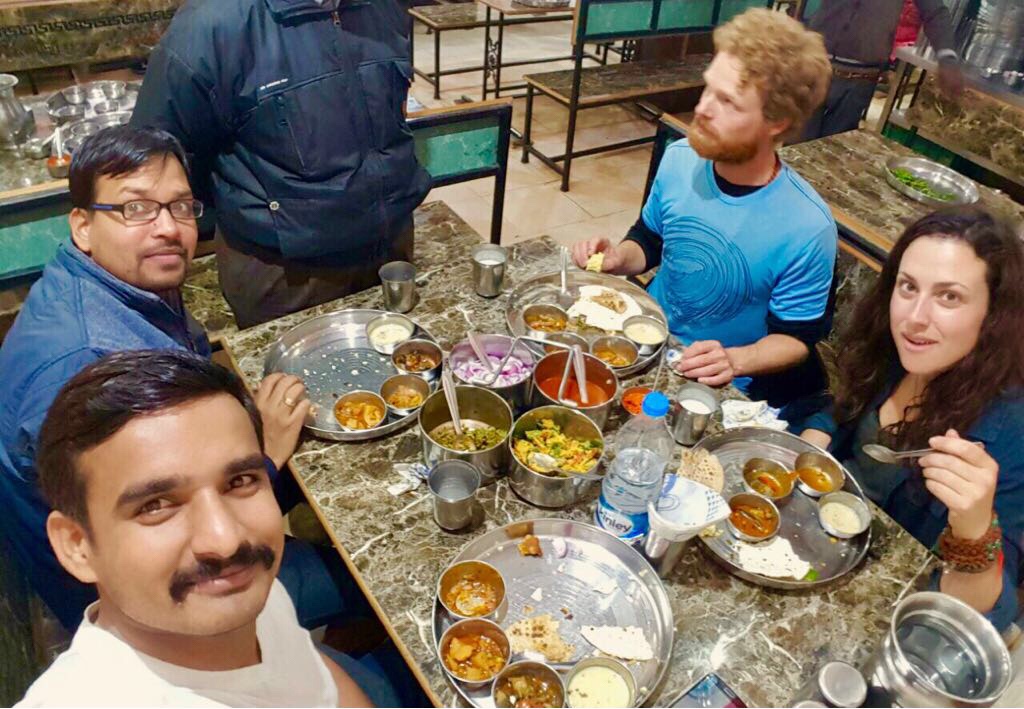 The next morning presented itself with even more surprises as our friends took us out for a local Gudrathi breakfast. We ate street food off of newspapers, 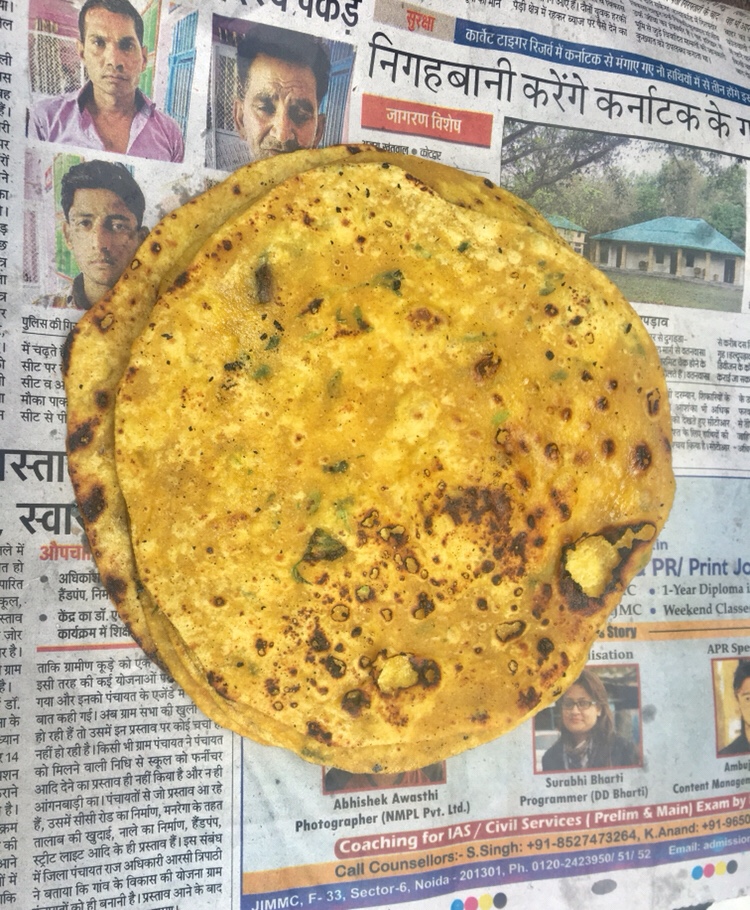 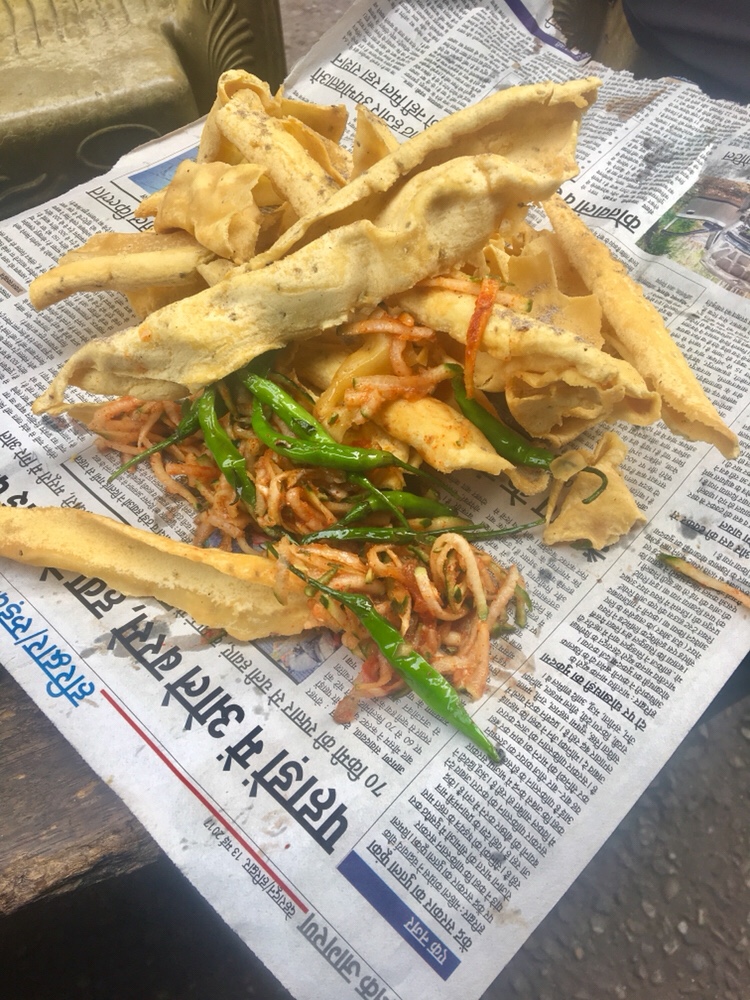 dipping the fried deliciousness into a variety of sauces and washing it all down with the best chai we’ve ever had. 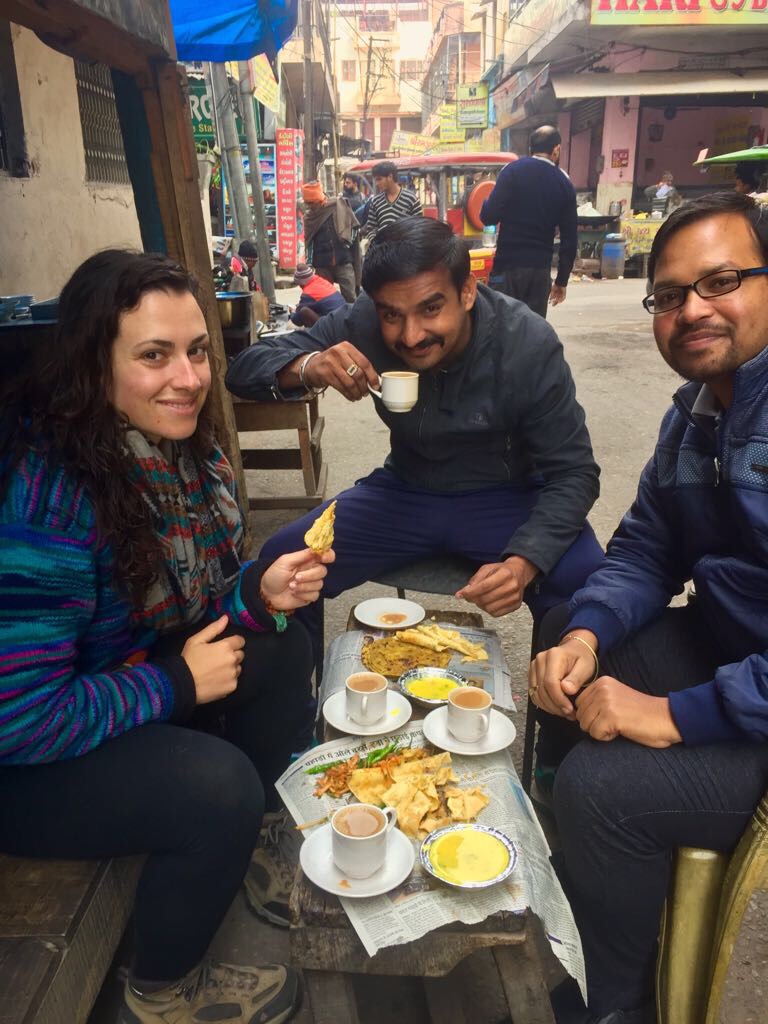 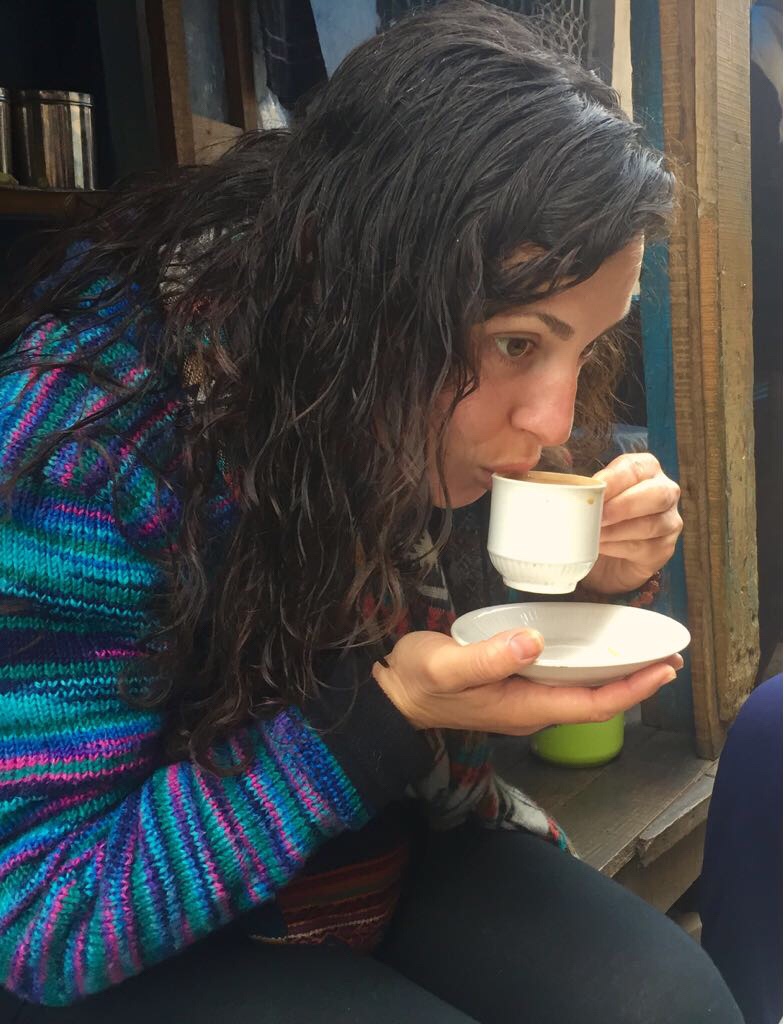 but it was literally like magic—he knew it, and so did the entire neighborhood. 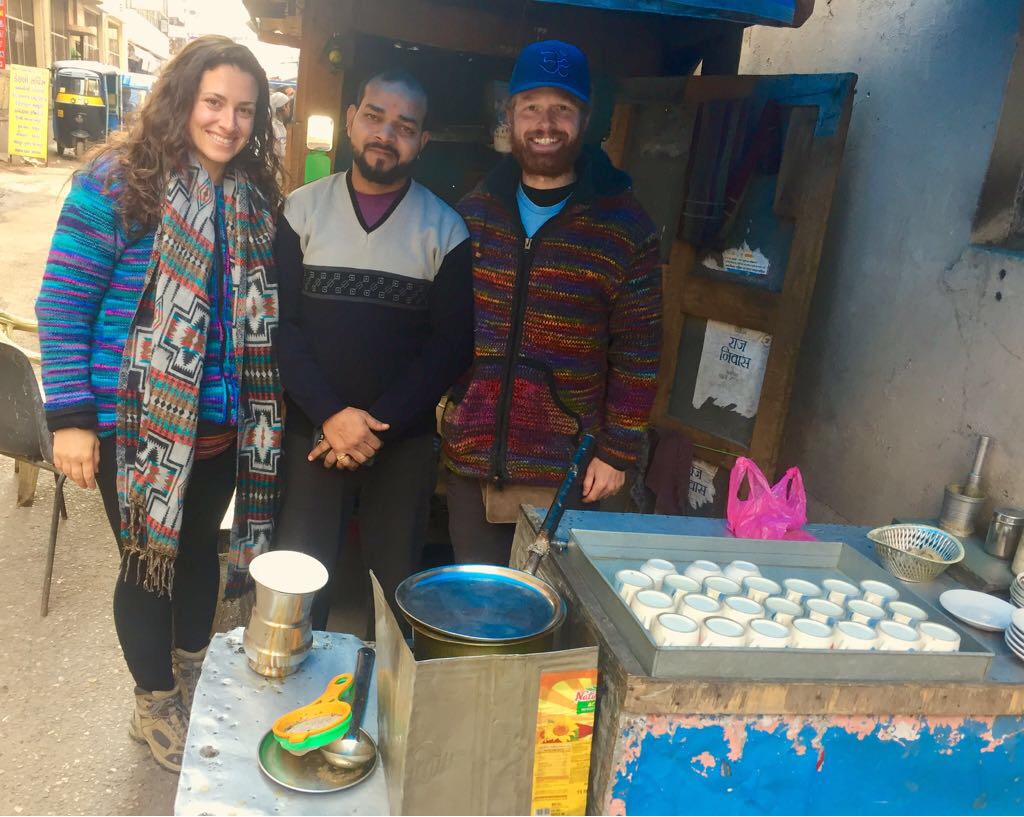 With our bellies full and our hearts happy and oh so grateful, we left our new friends at the bus station and headed off to get settled in Dehradun for our second chiropractic mission trip. 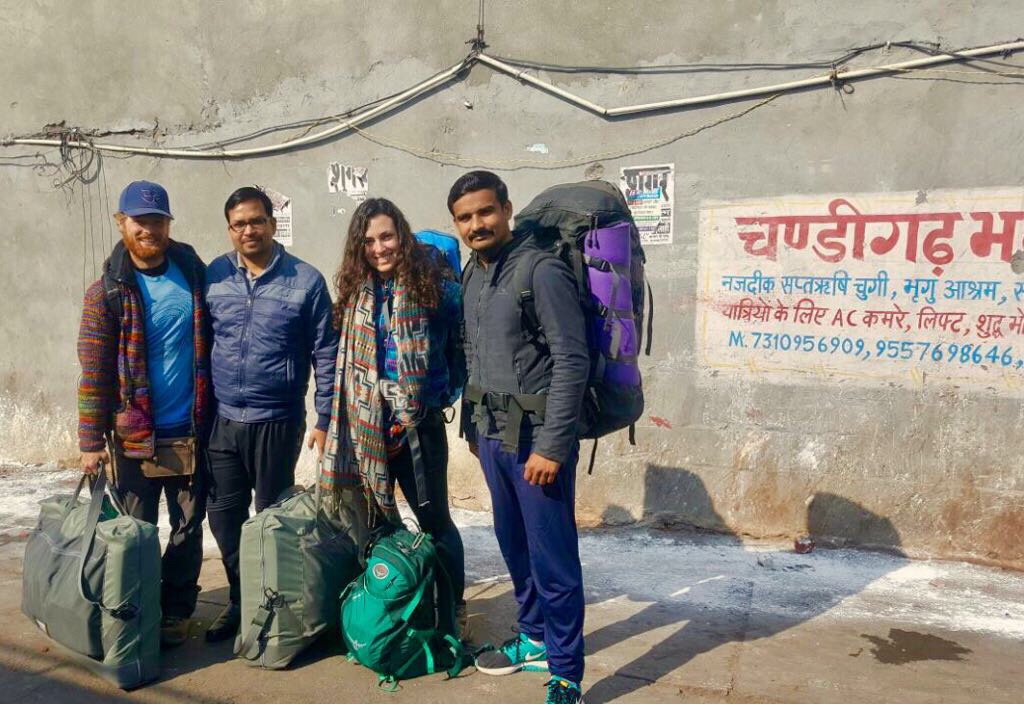 Sometimes when we choose to surrender to our circumstances and the mysterious forces of the universe, we can be gifted with some of the most unique and beautiful adventures.

4 thoughts on “Adventure Comes in the Strangest Packages”