A true desert jewel, the Golden City of Jaisalmer sits in the middle of the vast desert that separates India from the South Eastern border of Pakistan. Jaisalmer is an ancient city, sprinkled with old elaborate doorways 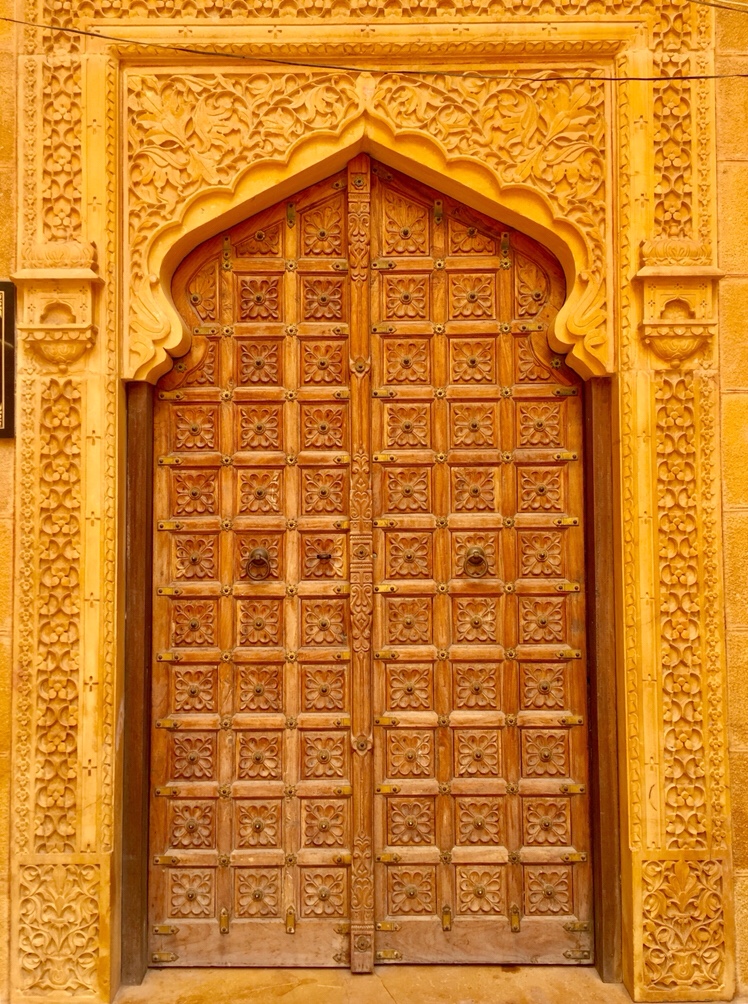 on every street corner,

stopping you in mid walk to admire the complicated details of these carved architectural beauties.

There is a desert gypsy flare among the people here, with many men sporting turbans and glorious almost cinnamon roll mustaches

Towering high above the sandstone colored city of Jaisalmer sits a monstrous fort in the same golden tones, built around 900 years ago, nostalgically reminiscent of the magnificent sandcastle you used to dream of building one day with all its cylindrical towers and multiple motes. 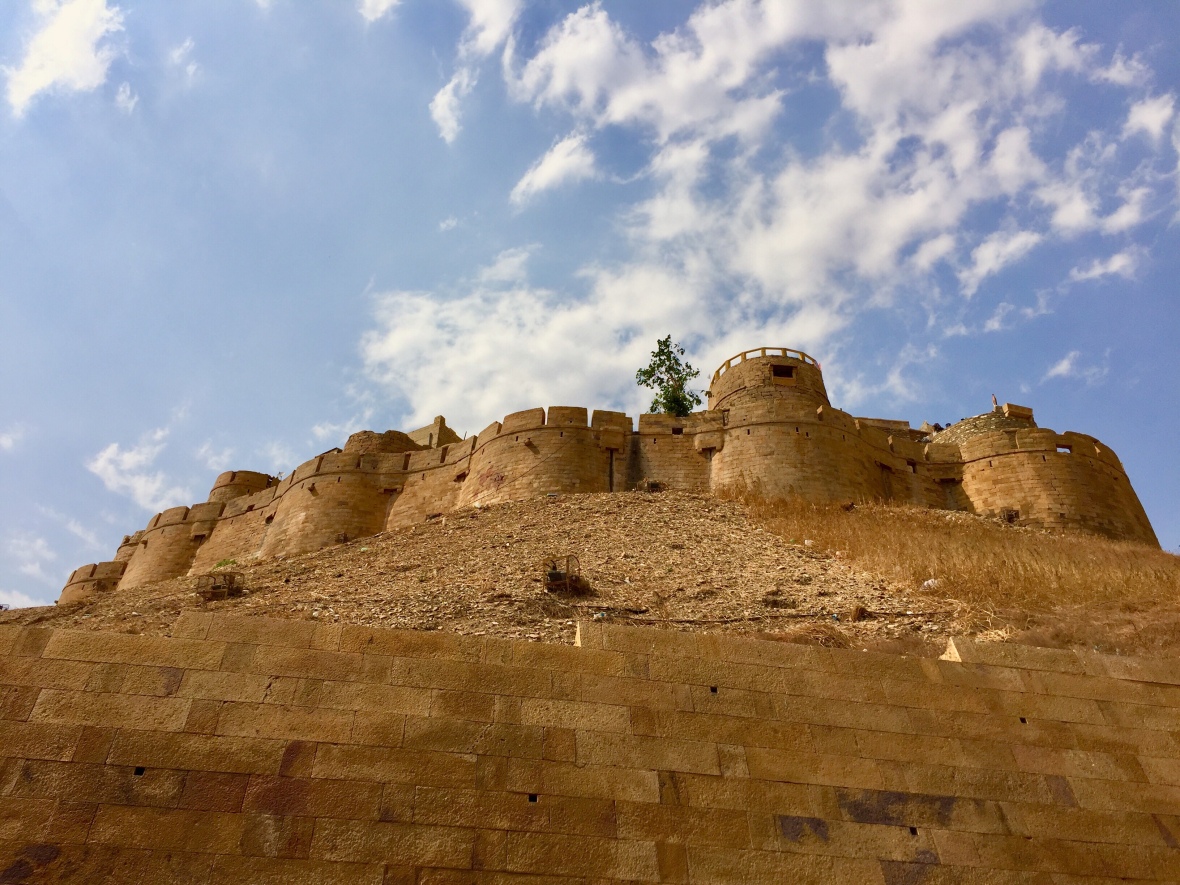 To this day, about 3,000 locals inhabit this fort, living their daily lives perched high above the city in this almost medieval of structures frozen in time. Inside the fort walls, there is a palace museum, 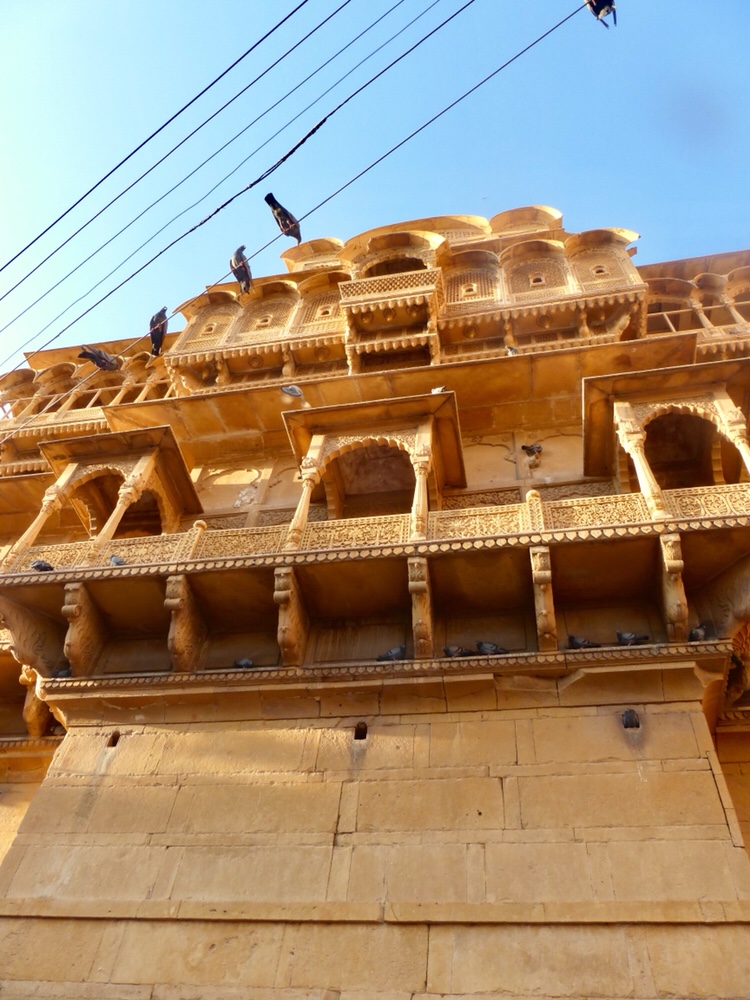 and a variety of romantic guesthouses littering the narrow, winding passageways. 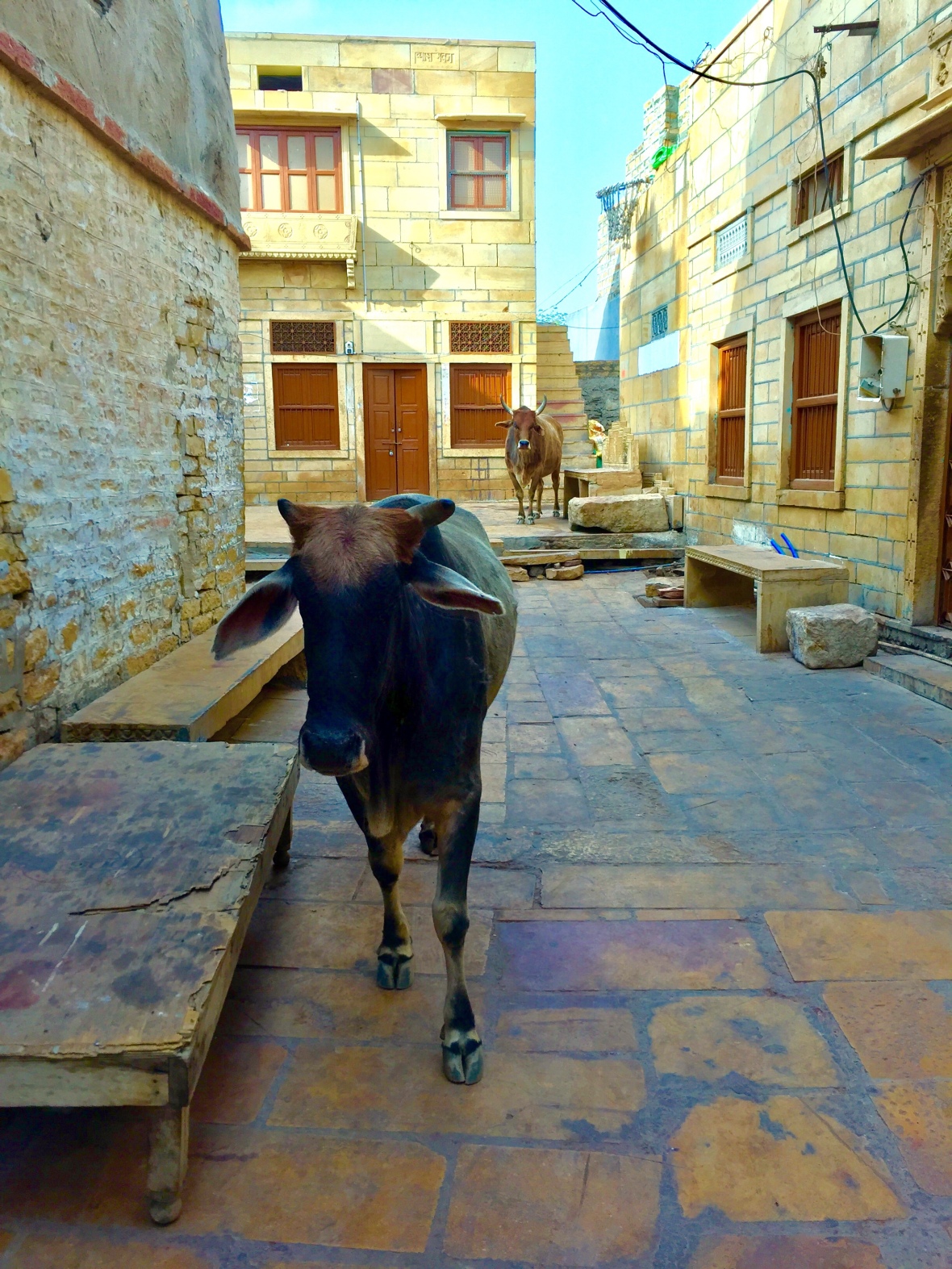 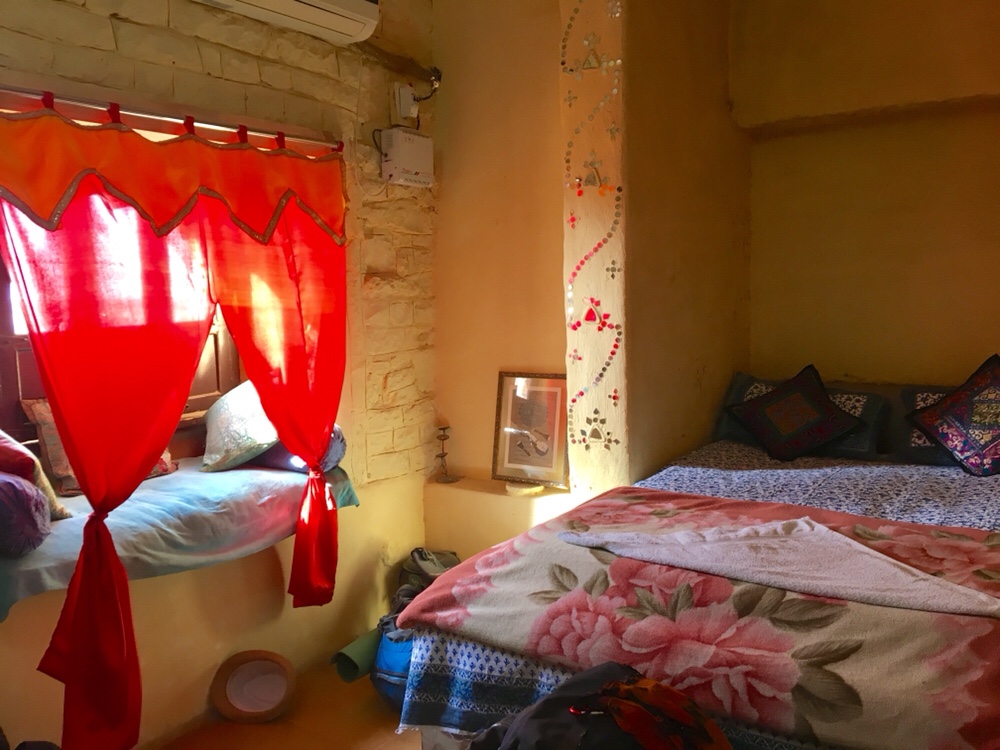 perched high above the hustle and bustle of the city below.

Being as it is located in such proximity to the Thar desert, one of the main draws of Jaisalmer is the opportunity to go on a true desert camel safari. As you walk through the city, many different vendors heckle you to book with their company, claiming their safari is the best one with the most “non-touristic” route. After a few days of exploring this mystical city and doing our own research, we booked with a company called Trotters that is run by members of a local village and donates a portion of its proceeds back to support the needs of the entire village. We would be embarking on a two night and three full day camel safari out in the middle of the dusty Thar desert.

The company jeep picked us up before sunrise and drove us about 40 kilometers out into the middle of the desert where we were to meet our cameleers, our camels Jablu and Bablu, 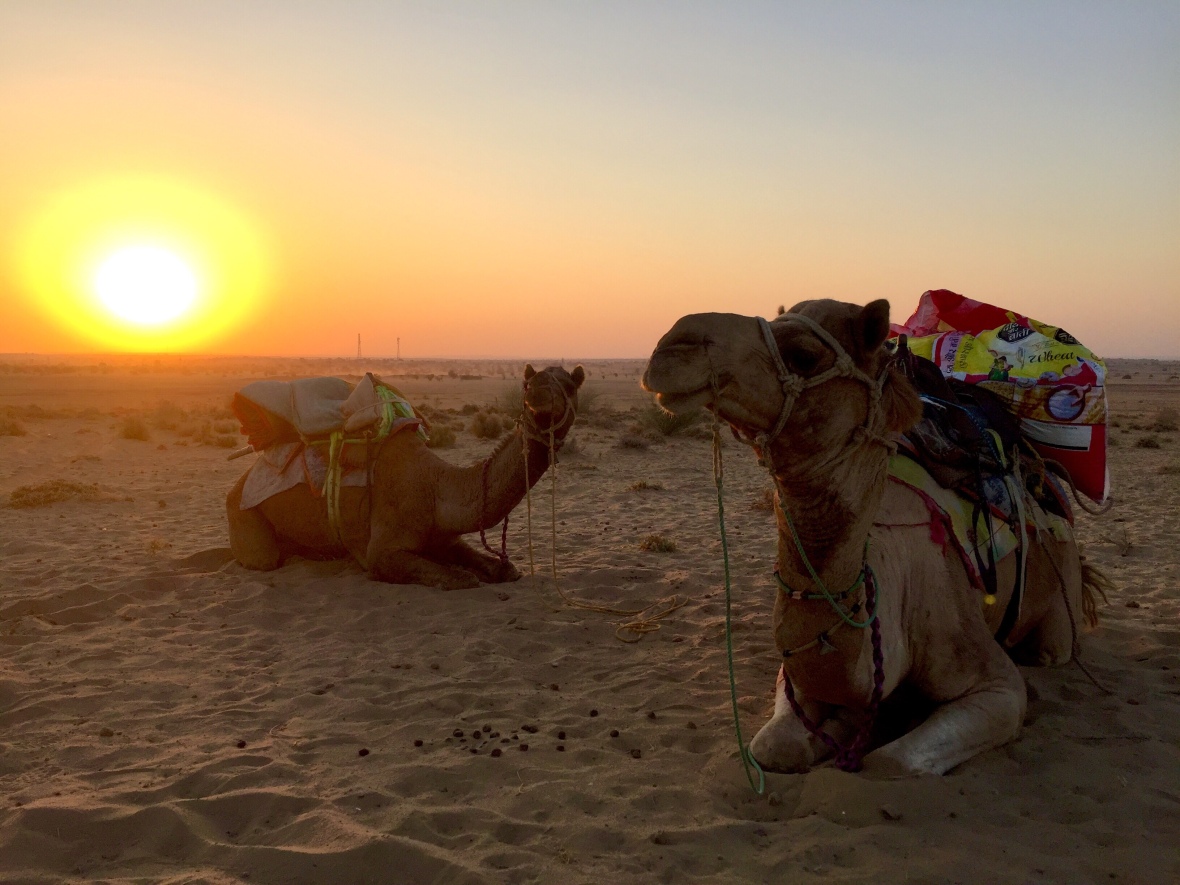 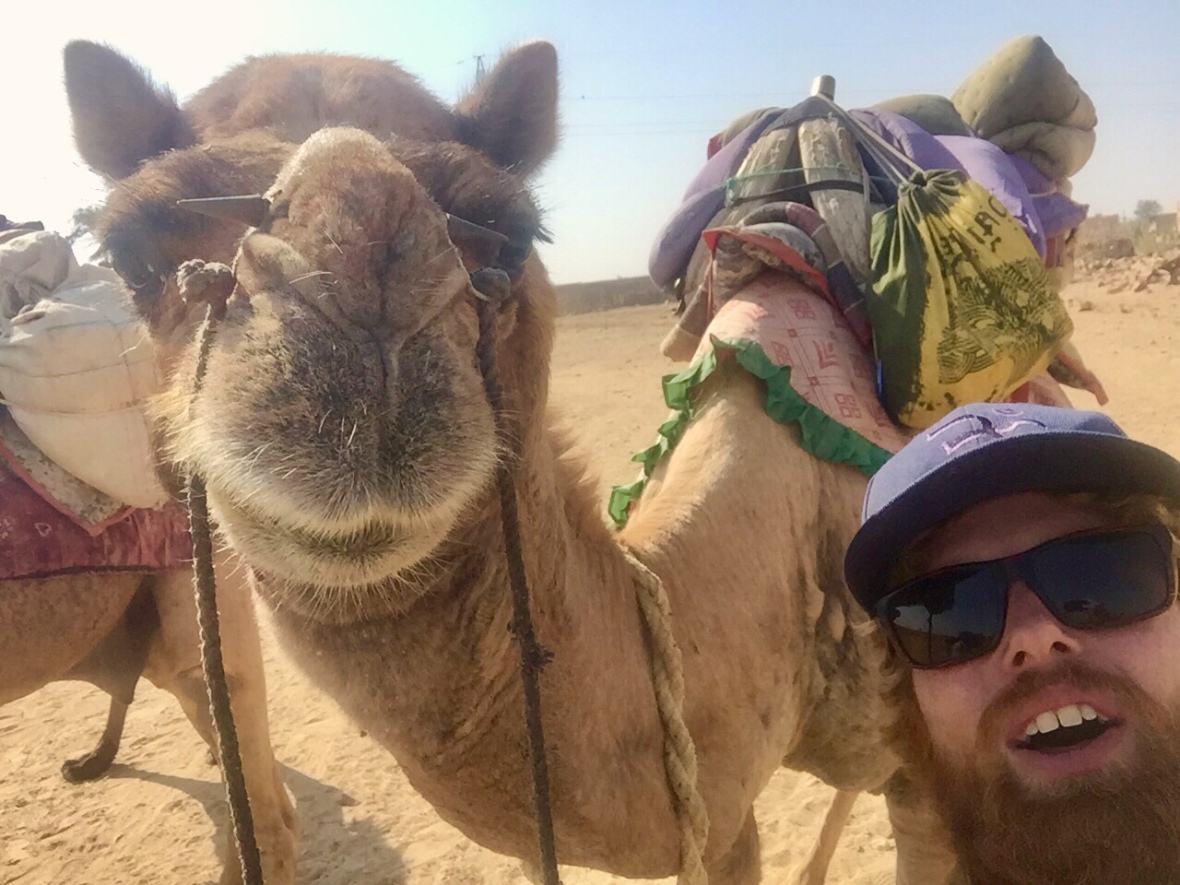 and the rest of our safari group for the initial day and night. We shared our first desert breakfast together of hardboiled eggs, masala chai, and packaged biscuits, as the glowing desert sun began to rise over the distant horizon.

Just as the morning temperature was beginning to rise, we boarded our humpback beasts for the first time 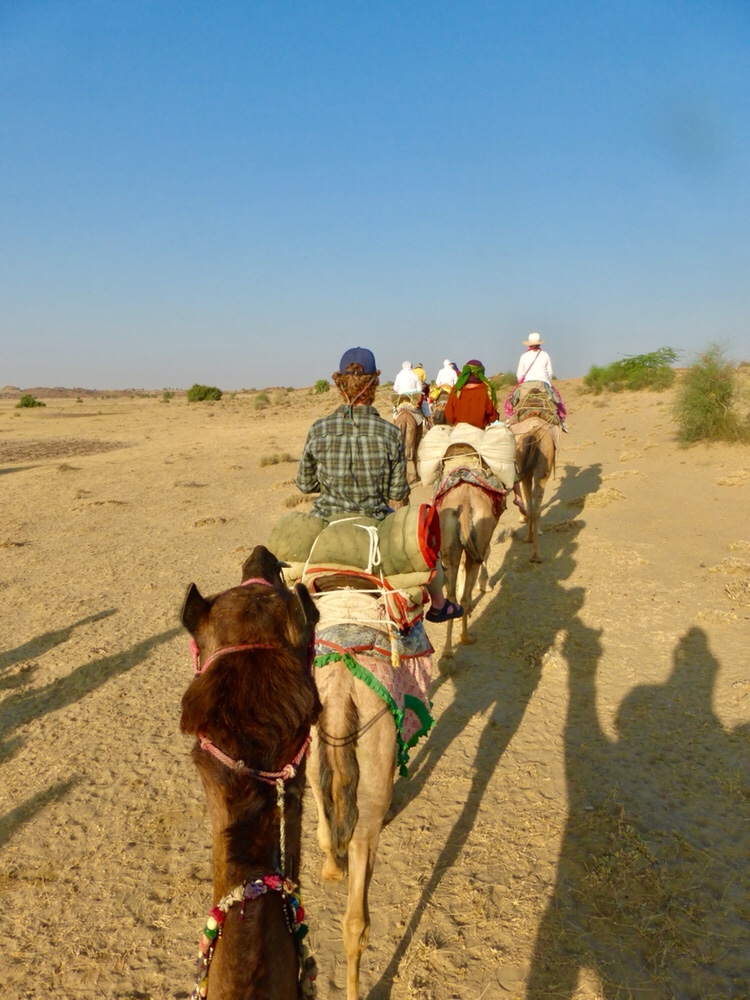 and rode off into the sweltering heat, stopping at a local desert oasis a few hours later for some much needed hydration. 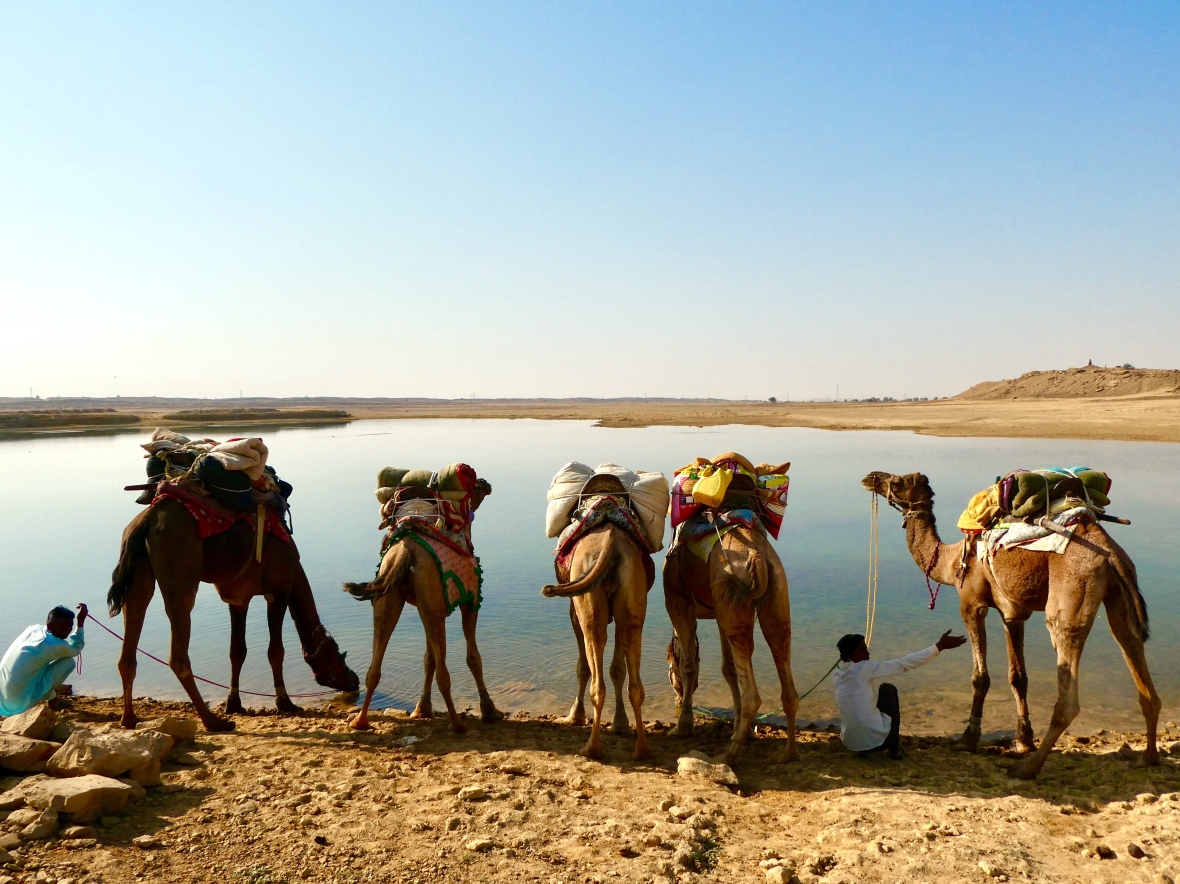 Now riding a camel is no comfortable feat. There are all sorts of muscles, tendons and ligaments in your pelvic bowl that are constantly being challenged with a camel’s less than gentle rock and bounce.

To our surprise on the second day, we were given the reins to our own camels, taught a few simple commands, and were pretty much left to our own devices.

Camels are quite the stubborn animals and would sometimes sit when you were commanding “walk forward” or would trot when you were commanding “slow down”. However, I now completely understand what the obessesion of riding horses is all about. There’s a certain ethereal communication that occurs between human and beast when one is riding on the latter’s back that cannot quite be explained other than directing you to the scene in Avatar where Jake Sully plugs his hair braid into the six legged horse’s receiver and the two become one, except maybe not quite as cool.

We spent the next three days bonding with our large mouthy camels,

riding them through the desert for a few hours in the morning, taking an extended lunch break under a shady tree during the hottest part of the day

while we read our books, took a mid-day nap, talked Philosophy and played captivating board games

and then riding our camels again for a few hours in the late afternoon, arriving at our night camp destination just in time to watch the glowing desert sun setting beyond the sand dunes.

In the evening time, we built a small fire and ate a delicious freshly cooked Rajasthani thali plate consisting of spiced rice, lentil dahl, a mixed vegetable curry, freshly made thick chapati, and of course the most amazing magic Rajasthani Thar Desert camel chili sauce. (Stay tuned for recipe in a following post)

At night we slept under the open moonless sky with only the bright constellations to light our surroundings. In the morning we woke up to witness the footprints from the dance party the local dung beetles had all over our sleeping bodies in the middle of the night.

We watched the sunrise in complete silence with a cup of hot, fresh masala chai and then did it all over again.

We passed a variety of desert wildlife, ranging from giant eagles 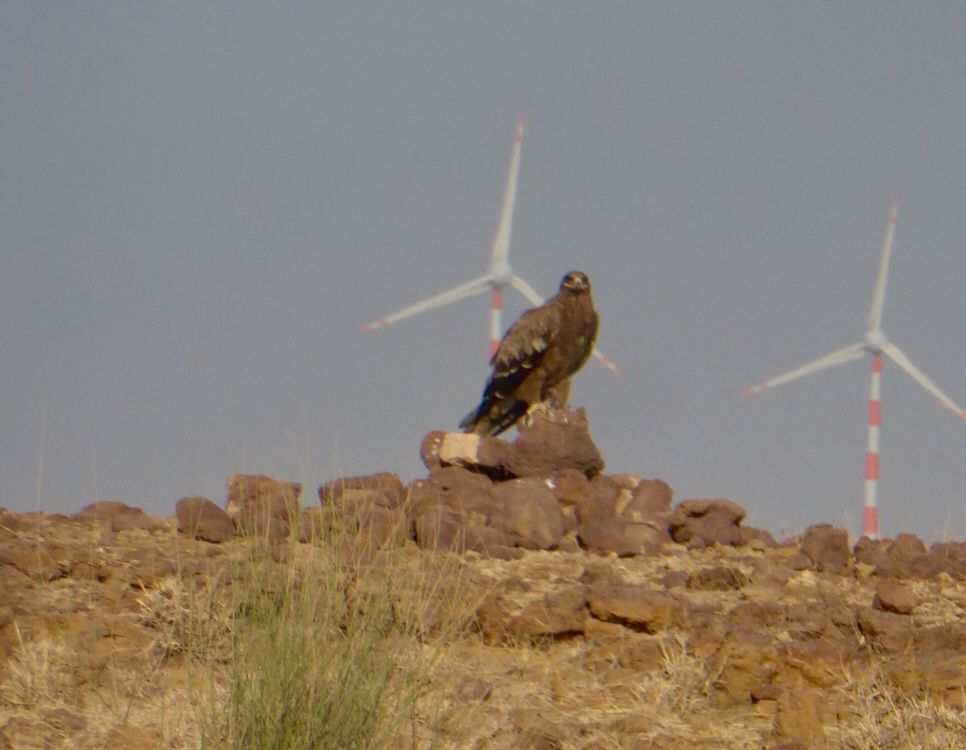 to poisonous snakes to speedy antelope and of course, wild camels and wandering cows. The landscape we crossed changed from wide open barren terrain to small plateaus, valleys covered in desert brush and trees, 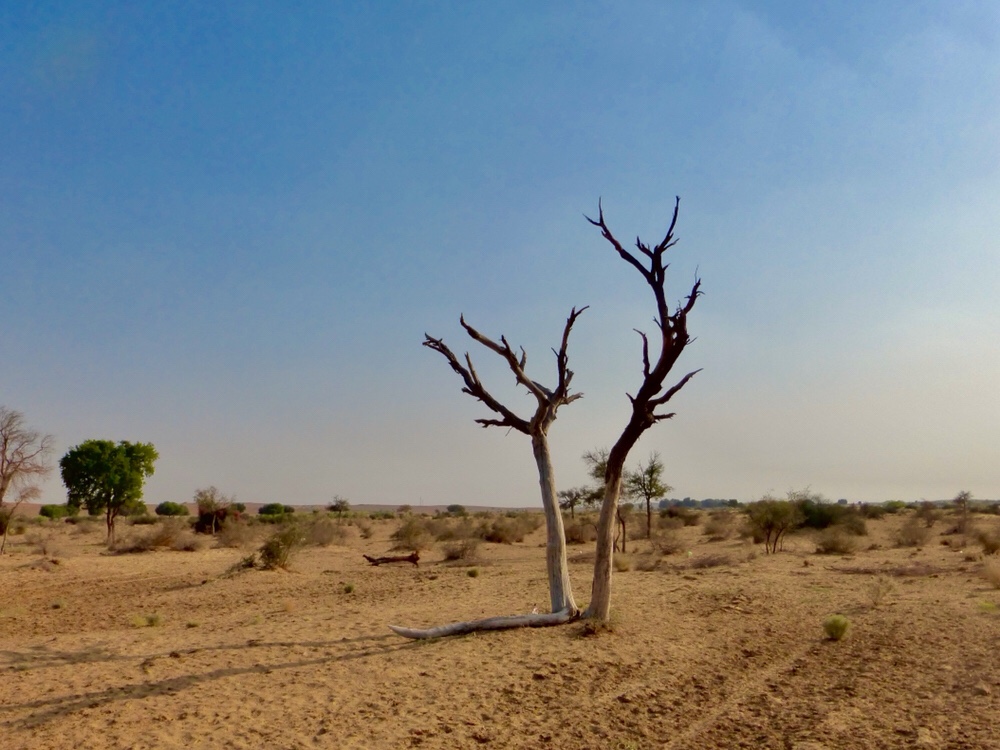 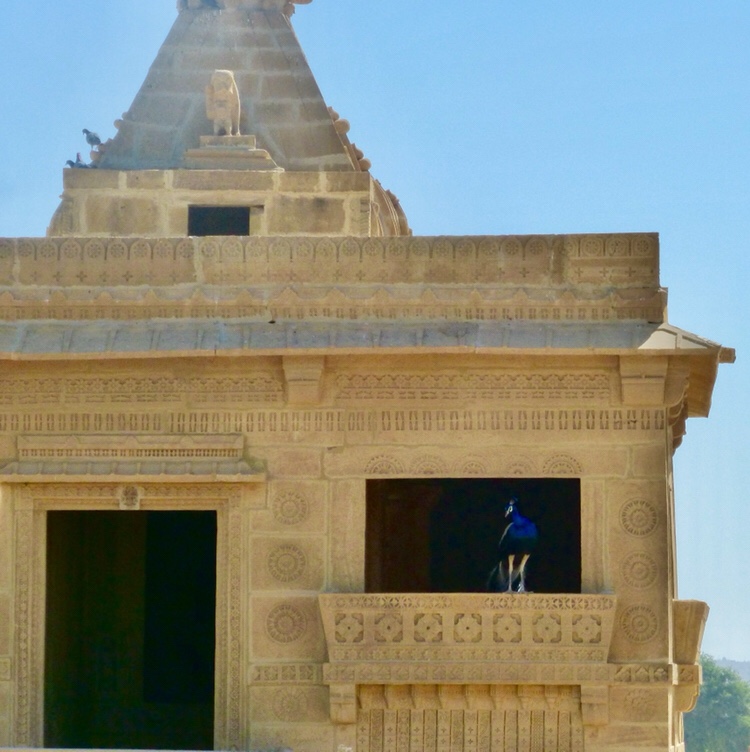 including a restored yet completely deserted palace that we explored for a while,

perched high above the surrounding villages.

Many watering holes and local villagers were passed along the way, giving us quite the insight into the local desert gypsy lifestyle. 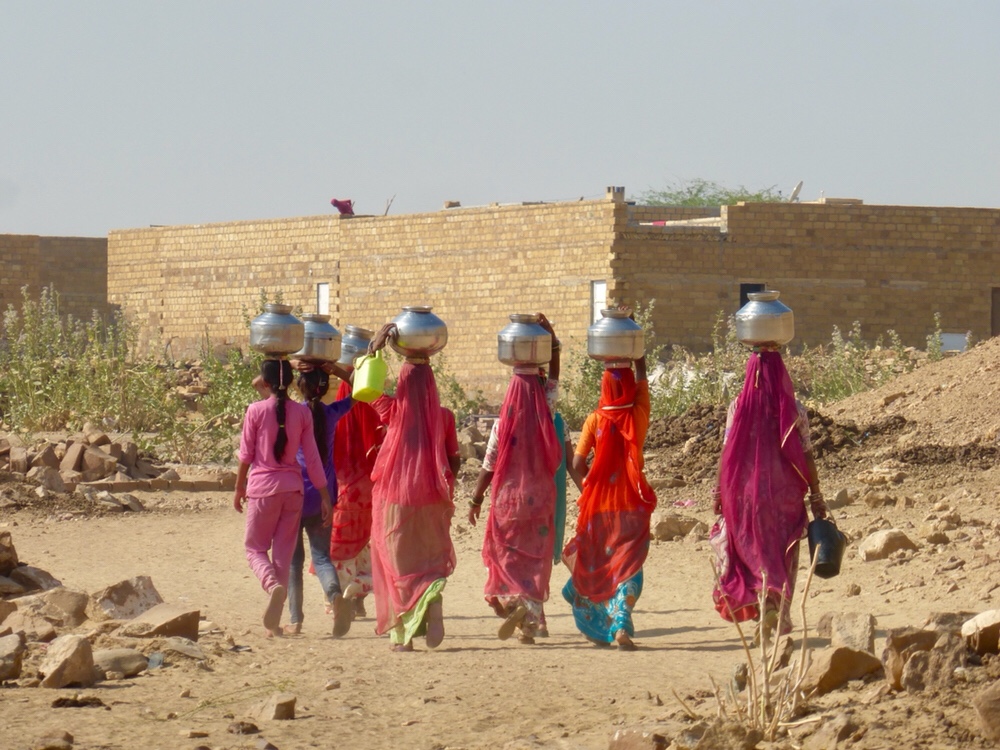 The first day and night in the desert was spent with 6 other Europeans who made our total group number 12 plus the cameleers and cooks. However, they left us by lunch time on the second day and the rest of our trip was quite a bit more intimate. We were lucky enough to have a solid group of 6 friends, 3 couples. Two of our friends, Kat and Eric, 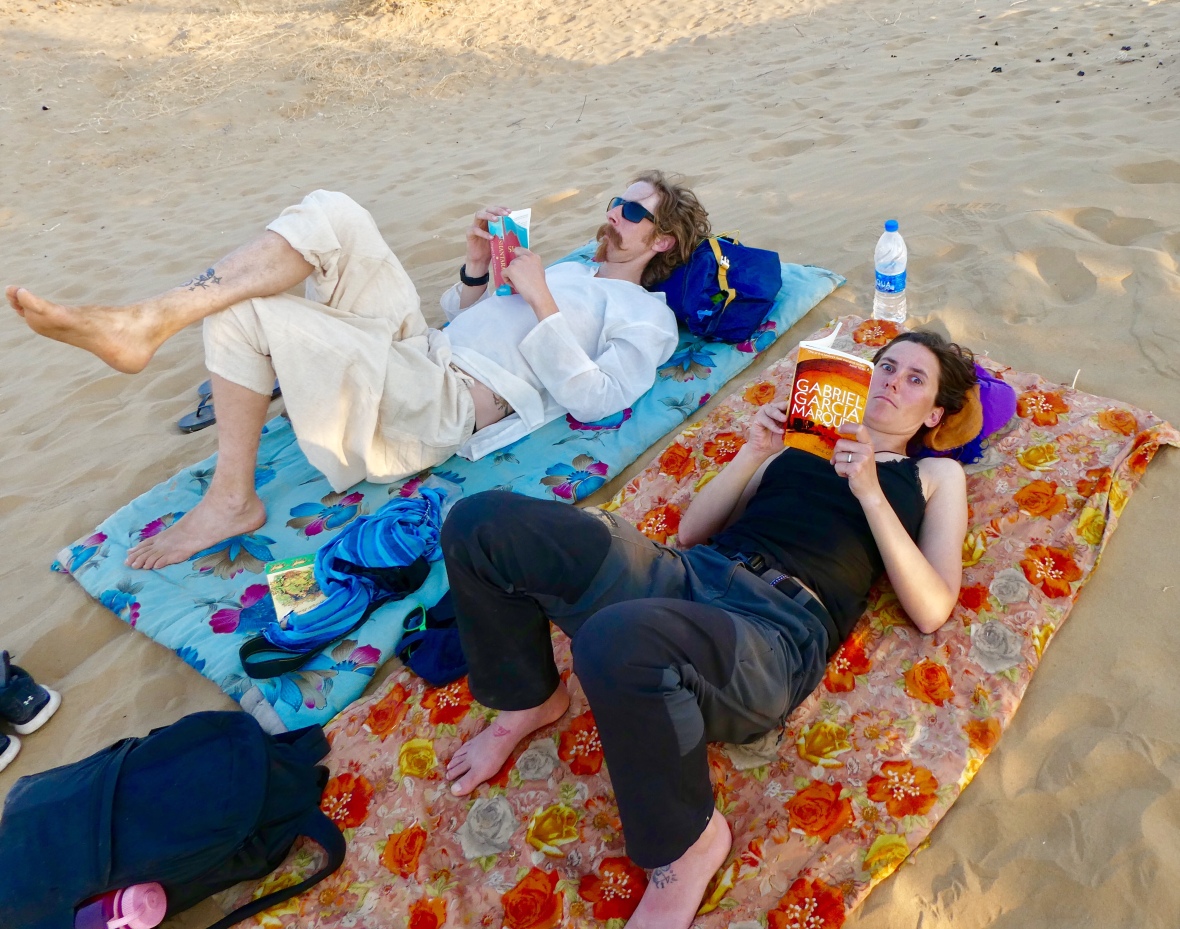 are from Colorado and happened to be traveling in Rajasthan during the same time we were so we decided to meet for a magical desert safari. Gary actually met Eric over 10 years ago when he spent a year traveling around New Zealand. 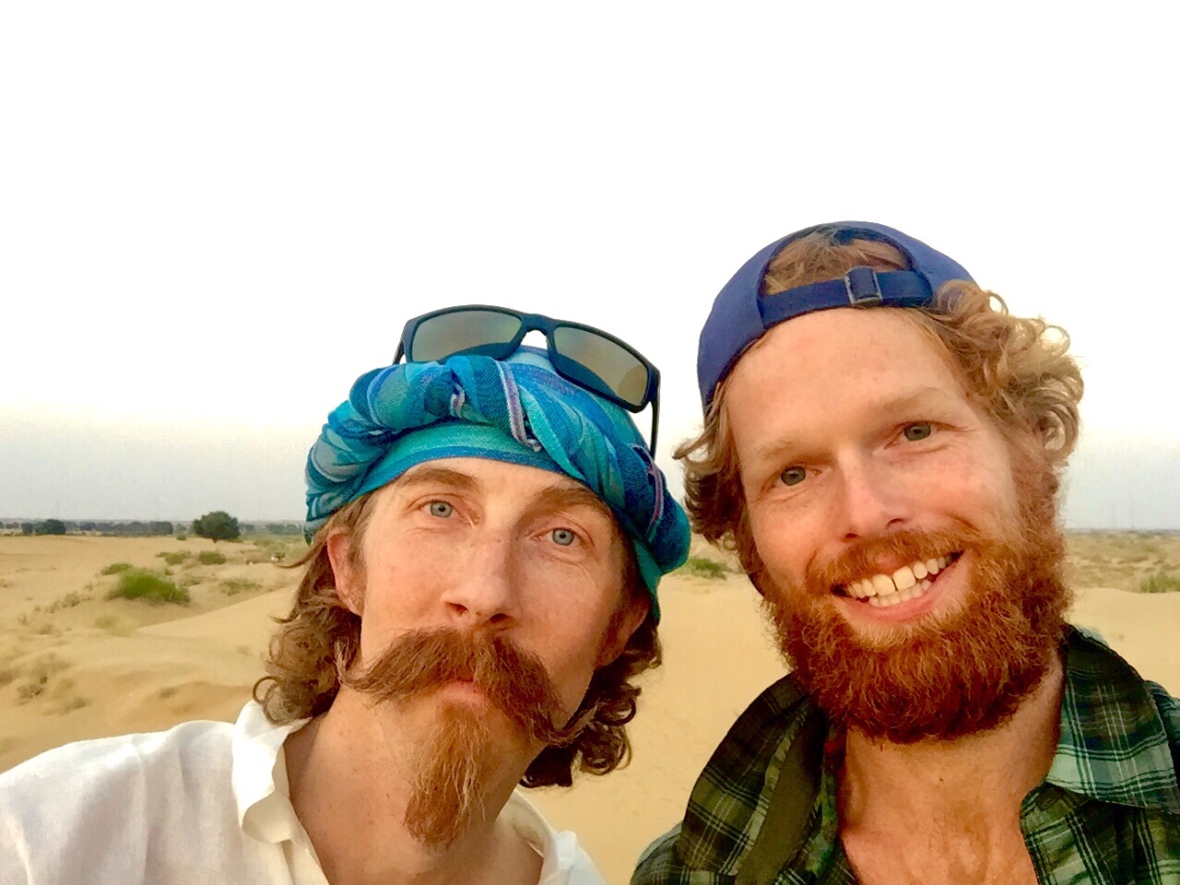 The other two were a young European couple we had met in Arambol as we were booking our train to Rajasthan. We ended up sharing the same initial train and found ourselves heading to the same final destination of Jaisalmer which necessitated a total of three consecutive trains in order to reach. We spent around 40 hours on trains with Nikola and Venus,

and needless to say, we became fast friends. Its not very often that you find yourself in a magical mystical situation with both old friends and new, and we are so grateful to have had the chance to share this experience with amazing friends in exotic places. 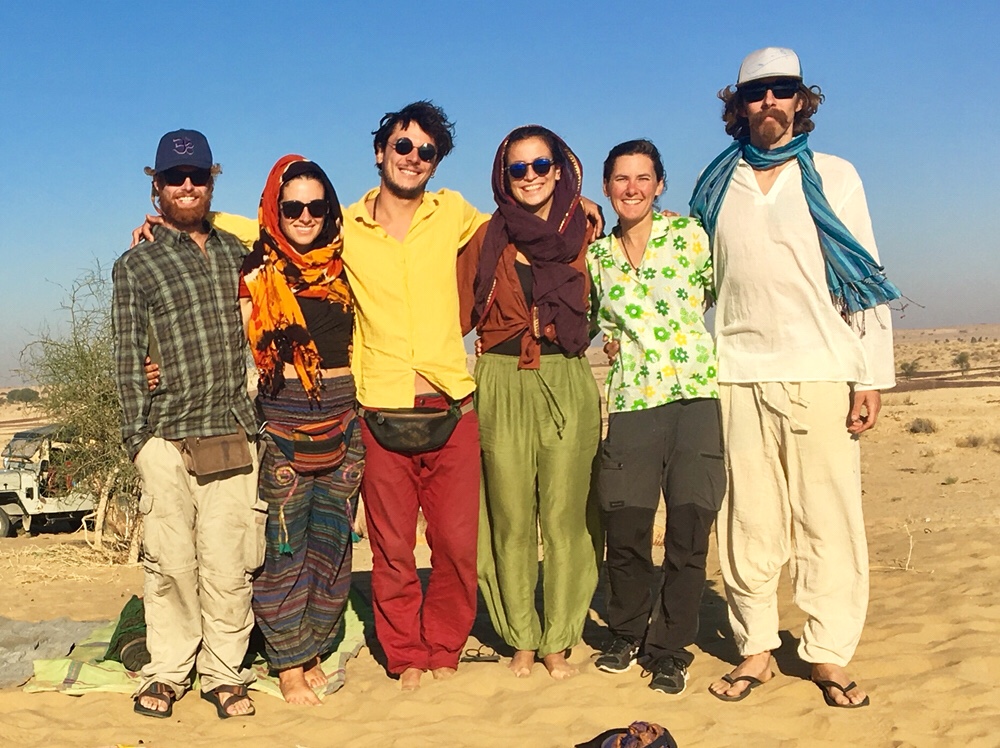 We’ve had the opportunity to spend some time in quite a few different mystical deserts throughout our lives and every time we leave, we notice a sense of stillness and connection within ourselves that can only be bred by the vast, empty landscapes of sand and sun. For us, the desert will forever be a place of healing, where one can hear the spirit within and be filled with fresh inspiration for new adventures to come.

-All aboard the camel train!

-With dust and desert as our terrain

-The heat was thick, the air was dry

-The bright red sun lit up the sky

-Across the dunes on hump-backed beasts 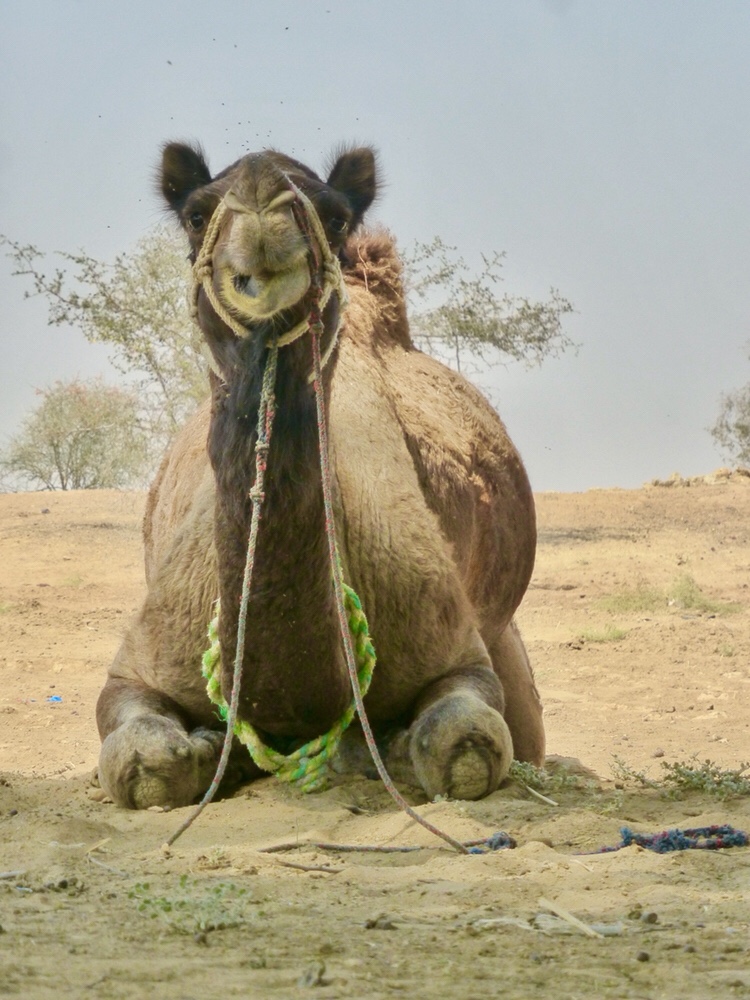 -The sun beat down upon our heads 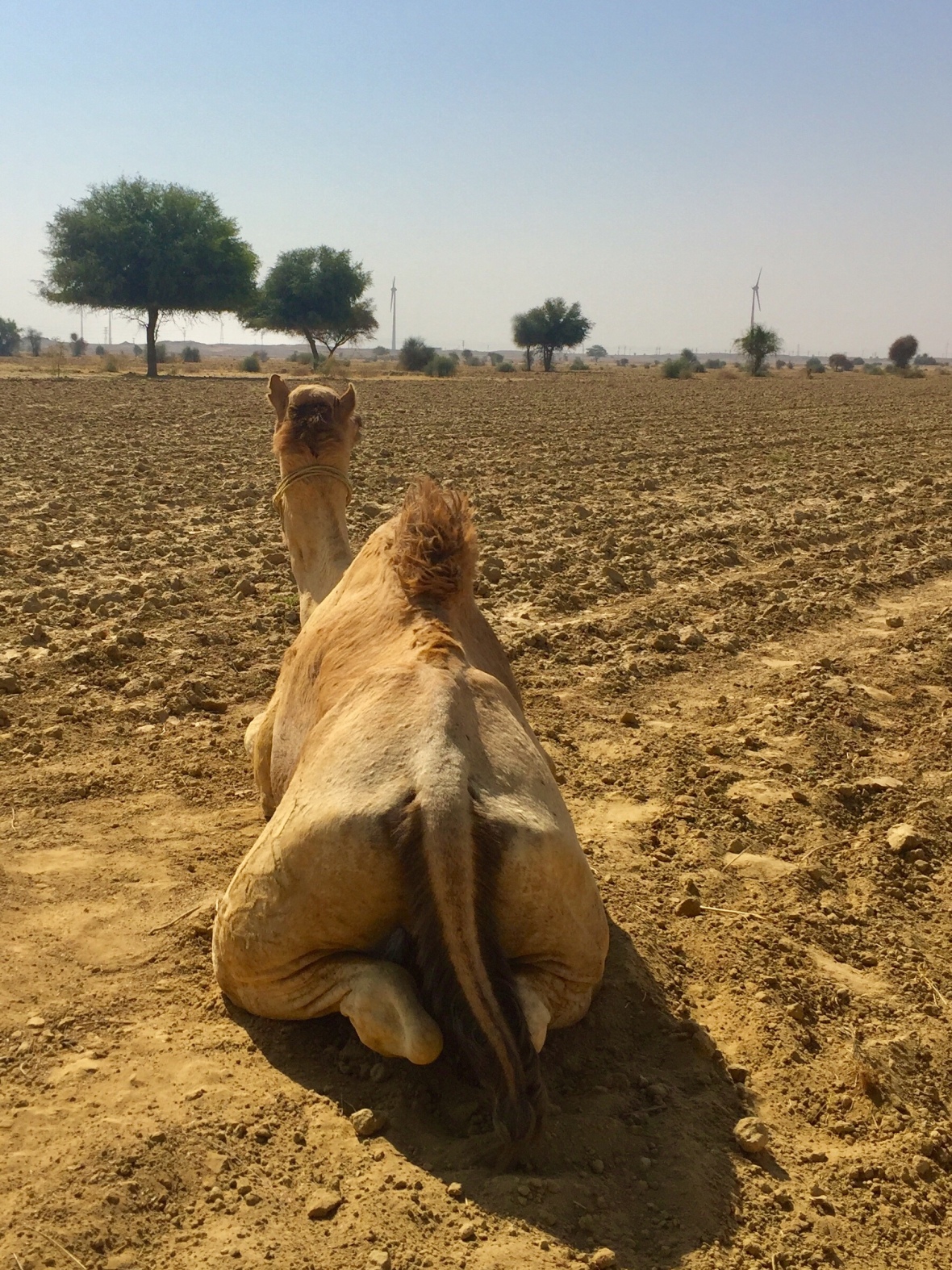 -Luckily we were stylin’ in our desert threads 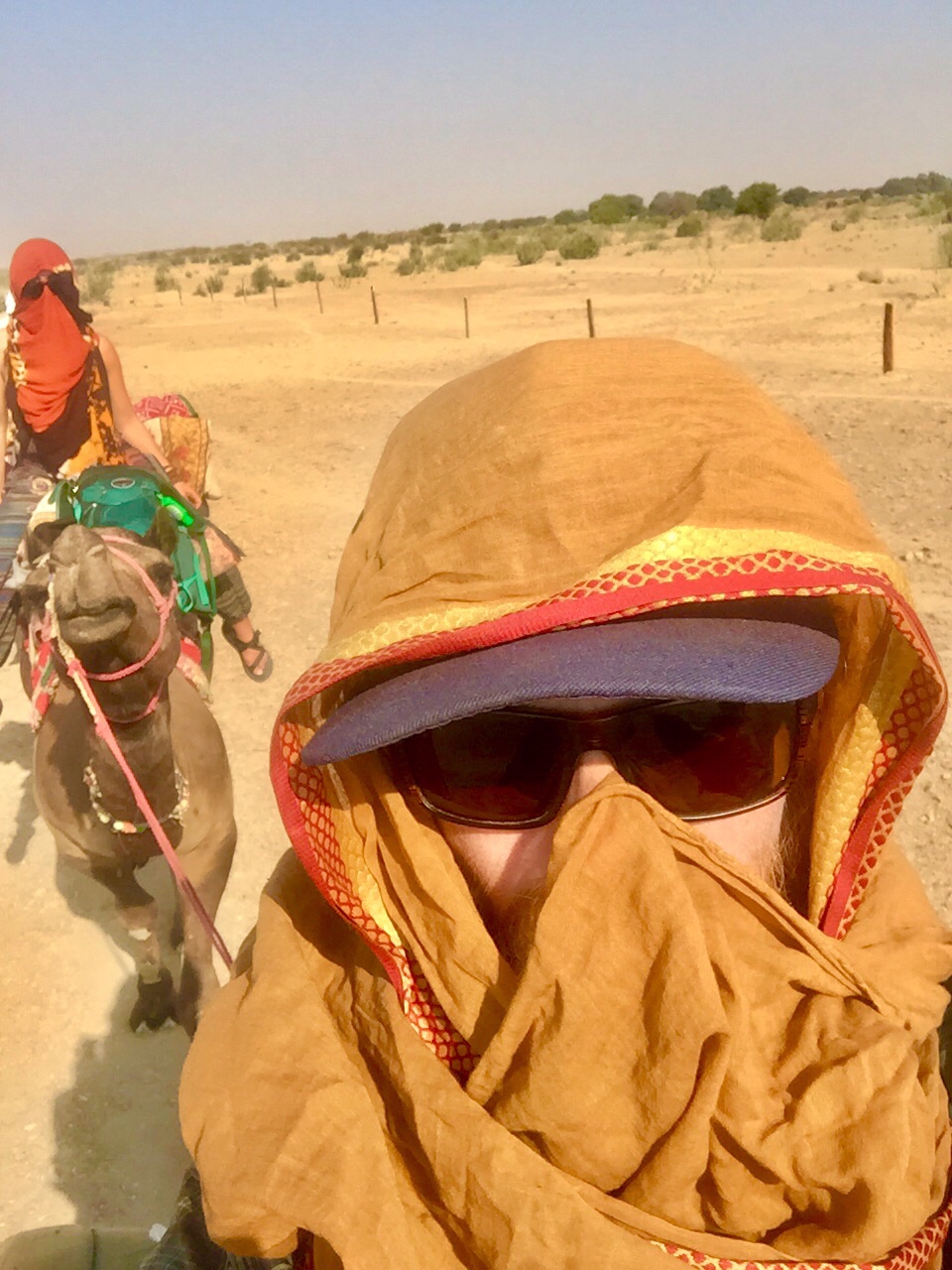 6 thoughts on “All Aboard the Camel Train!”