To most Westerners, little is known about Tibet’s geography, history, or culture. Situated amongst the tallest landmass in the the world, Tibet sprawls out west to east along the Himalayan Plateau, with China completely bordering it to the north, while its southern border is shared predominantly with India, Nepal, Bhutan, and Myanmar (Burma). 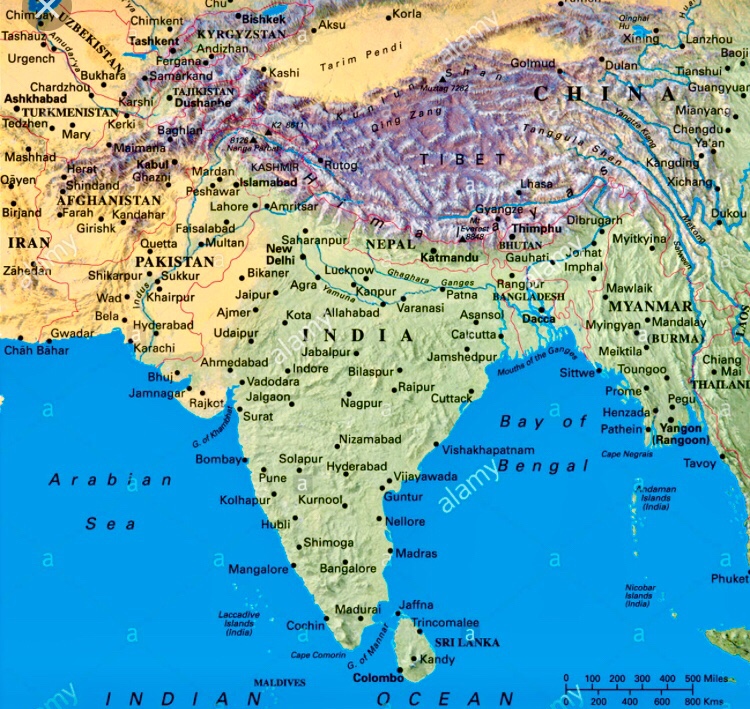 Prior to the invasion of China in 1950, Tibet had been under the Buddhist rule of thirteen previous Dalai Lamas. Unique to other governmental systems, Dalai Lamas remain in power for their entire lives, and when they die they reincarnate into the next Dalai Lama, who must be found somewhere in the country by an arduously complex selection process conducted from the previous Dalai Lama’s highest ranking officials. And so it went for the start of the 14th Dalai Lama’s reign, who was found at the age of five in a remote village of Tibet and brought to the Potala Palace

in Tibet’s capital, Lhasa, where he underwent the rigorous training and education requirements of all of the thirteen Dalai Lamas before him. However, his time as Tibet’s leader would be unfortunately cut prematurely short as China’s invasion eventually forced him, at the young age of 15, to flee for his life into India through icy high alpine Himalayan passes. He settled in McLeod Ganj, nestled in the Himalayan foothills of India’s northern state of Himachal Pradesh, where he remains in exile to this day.

It can be said that Tibet’s fate was a classic tale of the big fish eating the little fish. On the heels of World War II, while the rest of the world was in a gigantic race to industrialize, modernize, and globalize, Tibet was still operating under an ancient political infrastructure from a bygone era, remaining isolated from the rest of the world high up on their Himalayan plateau. With fierce competition for resources and power, it was inevitable that Tibet would eventually be absorbed by either China or India. Despite a sustained rebel defense effort, Tibet was no match for China’s gigantic Communist military power, who wasted no time making their victorious swoop, effortlessly claiming Tibet as their own. The saddest part wasn’t so much the political takeover of their government, but the decimation of their peaceful and rich Tibetan Buddhist culture that permeated their whole land.

Though the 14th Dalai Lama pleaded with China following their invation to allow Tibetans to peacefully practice their own religion, the Communist regime refused to perceive anyone who followed the teachings of Tibetan Buddhism as anything but a threat to their empire, and they aggressively persecuted any Tibetans who openly supported the Dalai Lama. The situation in Tibet is a textbook example of cultural genocide, and to this day China continues to infiltrate Tibet with millions of its own people. Currently, 60% of Lhasa shopkeepers are of Chinese decent, while only 40% are native Tibetan, and the Tibetan language has been completely outlawed in schools throughout the region formerly known as Tibet.

Perhaps knowing that all of this was an imminent reality to come even at the age of 15, His Holiness the Dalai Lama set out to preserve the precious religion and cultural heritage of his fallen people upon his arrival in McLeod Ganj in 1959. He very quickly set up Tibetan schools and built monasteries and temples throughout the little mountain town. Additionally, he manifested Tibetan handicraft and trade shops that increasingly became employed by the thousands of Tibetan refugees that continued to flee Tibet through the dangerous high altitude Himalayan passes that lead into India in the years following China’s invasion. The Dalai Lama even set up a new government for the exiled people of Tibet, which governs and unites the numerous Tibetan communities scattered throughout India today.

Located just a twenty minute walk below the higher mountain village of Dharamkot, where we lived for five weeks, the village of McLeod Ganj perches on green Himalayan hilltops,

with snow-capped mountain peaks looming high above. Walking through its narrow streets is a cross-cultural experience,

highlighted by distinct Tibetan influences but with all the undertones of India. Native Indians sell their fruits and vegetables to Tibetan Exiles

in exchange for rupees, juxtaposed to Tibetan restaurants and clothing shops, while the familiar buzz of tuk tuks can be heard on the maze of streets outside. The smell of incense permeates the mountain air, mixing with the intoxicating aroma of momos sizzling in a frying pan

just outside of the ornately carved Tibetan Buddhist Temple.

Older Tibetan women dressed in their wool aprons (known and pangden) stand outside, silently murmuring their mantras with each passing of a prayer bead between their fingertips,

while scores of monks dressed in their red robes (known as kasaya) stroll towards or away from the Tibetan Buddhist monastery.

Inside a big open building, we are amazed by the gigantic looms that hold the criss-cross patterns of authentically hand-made Tibetan carpets in-the-making. We listen with interest and awe as the manager enthusiastically shares with us the process of Tibetan carpet weaving. With a smile on his face, he proudly relays the importance of the Dalai Lama’s successful efforts to ensure the preservation of Tibetan crafts and culture. Like many of the Tibetan Exiles living in McLeod Ganj, the manager is very clear in communicating to foreigners the dark realities of Tibet’s current political situation, as well as expressing his enthusiasm for the future of his people. He intently educates each foreigner about what is happening in Tibet, so that we will in turn know the truth and tell others the truth. While there is the obvious reality of an oppressed civilization, there is a great sense of hope and determination of preserving their religion and culture with or without their native land, a hope and determination that has been deeply inspired by the virtues and values of His Holiness the Dalai Lama.

In our heart of hearts, we had hoped to get to actually see the Dalai Lama, but we didn’t set any expectations because these sorts of things usually lead to disappointment. We had convinced ourselves that to merely be in the hometown of the Dalai Lama was an honor in itself.

However, to our great surprise we heard through the grapevine that the His Holiness the Dalai Lama had decided to have a private audience in his temple of foreign passport holders during our second week in the area. We eagerly submitted the required paperwork to the local government office and began to anxiously await THE BIG DAY.

We awoke like two kids on Christmas morning, quickly got dressed, ate our breakfast and headed down the 20 minute walk through thick green monkey filled forest 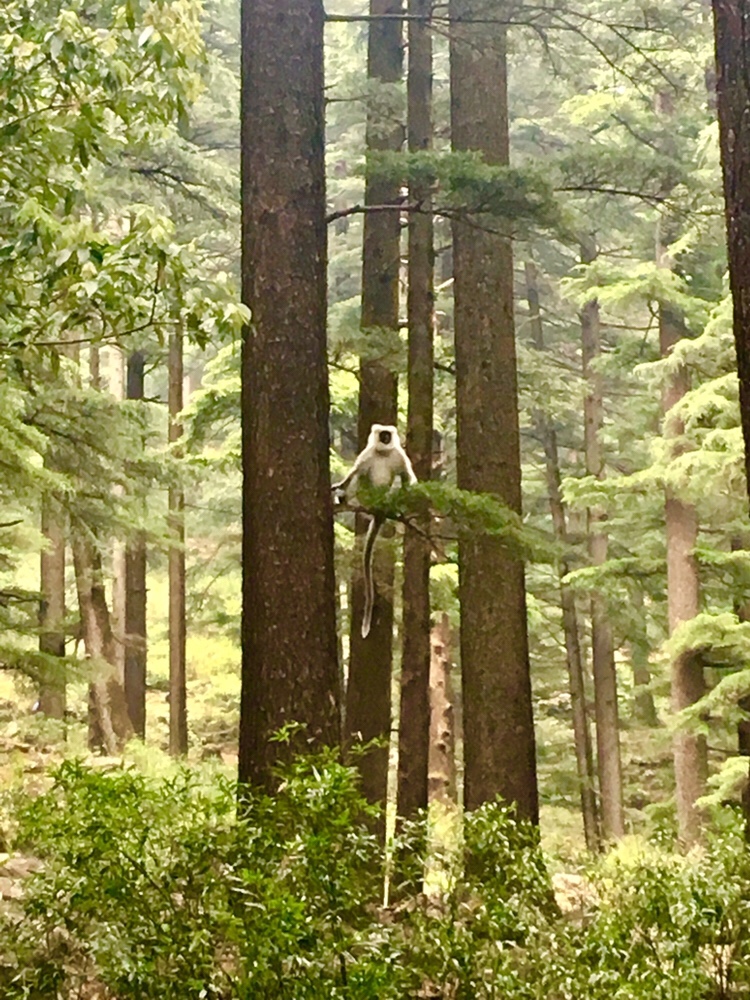 to the town of McLeod Ganj, weaving through the crowded streets and finally arriving at the doors to the Dalai Lama’s temple. Upon entering the premises, after a thorough security search, we were guided to a seating area under a large white tent where we realized that our eagerness was not large enough to get us there in time to get a good seat. We were early and the place was already packed, crawling with foreigners from all over the country trying to get the same twenty seats just in front of where the Dalai Lama would be seated. After a few moments of refusing to sit down in our distant seats with a  diagonal view, an announcement was suddenly made requesting all attendees to organize themselves by which country they were from so that the Dalai Lama could make his rounds to each organized group to take an intimate photo with the excited travelers.

As our luck would have it, USA was placed front and center, definitely the best seats in the house.  Needless to say we were overjoyed as we made our way to join the rest of the Americans.  We were soon informed that upon entering the room, His Holiness the Dalai Lama would make his round to each country group for an intimate photo that would be available for our memory.  So cool.  We quickly organized ourselves into picture formation and eagerly awaited the approach of the most famous spiritual leader in the world.  Minutes later, His Holiness began to make his rounds.  We watched patiently as he circled around the room stopping in the center of each group to smile for the camera.  Finally it was our turn!  There he was in his burgundy robes, practically gliding across the floor to group USA.  As he got closer to our group I realized that he was heading for the slightly empty space just to the left of where we were stationed.  Just before he turned around to pose for the camera he looked down right at us (as we were perched on our knees) and grabbed my hand!  He proceeded to squeeze my hand for the entirety of the photo.

I held hands with His Holiness the Dalai Lama!  I say it now and I still can’t believe it.  I’m sure the look on my face in the photo says it all!  What a blessing and honor to have been in such close contact with a man that has been so influential to the movement of compassion and kindness in the world.

Upon finishing his rounds around the room, His Holiness made his way up to the small seat where he would be seated for a two hour teaching.  He proceeded to speak about current world issues, Indian history, Tibetan Buddhism and culture, meditation and how it affects brain chemistry, crack jokes about sensitive subjects, and overall educate his audience on what it really means to be an embodiment of compassion, love, and kindness.  He answered questions with knowledge and grace, speaking in English for the entirety of his teaching.  He made clear and focused points about issues that are convoluted and corrupt.  He made us laugh and made us cry.  Never have we had the opportunity to sit in front of such a knowledgable, highly educated, quirky, hilarious, eloquent, calm and collected human being that simply emanates the deeper truth of life.  If you ever get the chance to see him in person and hear him speak, we highly recommend to jump on the opportunity.

The entire experience of being in the presence of the Dalai Lama was one that we will never forget, and will remain one of the brightest highlights of our lives. His living example of what it means to be a human being inspires us more than ever to shed our own light to the world, and to inspire that light in those around us.

Beyond his verbalized teachings, it was also a lesson in trusting that the universe will provide exactly the life situations that are meant for you at exactly the right time and that there is no need to stress about where your seats happen to be in the room at that particular moment, because everything can change in a heartbeat and you can end up front and center holding hands with the Dalai Lama.