Two days and several hundred mules later, we finally found ourselves on one fine late afternoon at the point of our most challenging ascent, into Lukla, gaining 500 meters in two hours to dump us into a town perched on the edge of the world, surrounded on all sides by snow covered mountains.

Up and up we climbed, switchbacking along rocky paths and constructed rocky staircases.

Late afternoon gave way to twilight, and per usual procedure, our headlamps back on our heads once again, we slowly but surely put one foot in front of the other, stair after stair, until sometime well after dark, we passed the first dwellings of Lukla, sitting at 2860 meters (9383 feet). As we approached the main part of the village, the contrast between the sparsely populated countryside that we had come from and the place we had just entered became clearly obvious. Outdoor apparel and gear stores lined the streets, along with the numerous international alpine enthusiasts that went in and out of those shops to gear up for their high peak adventures. 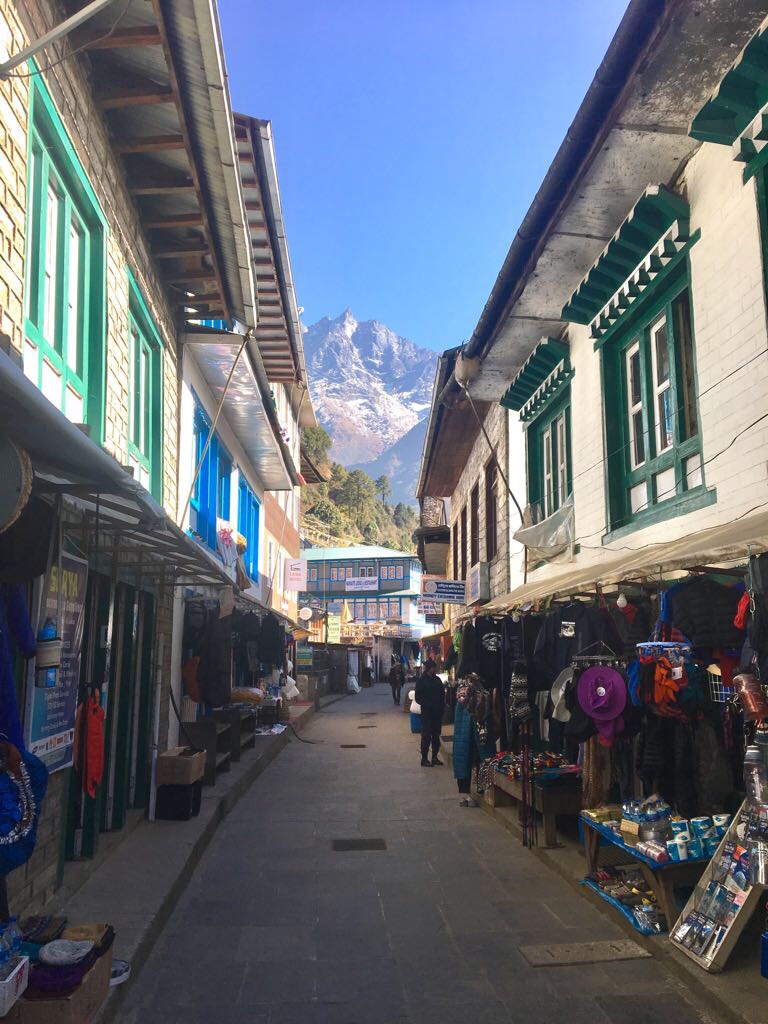 And of course there was the airport, complete with its most dangerous runway in the world, which lay on a 15 degree angle and dropped of a sheer cliff into high winds. 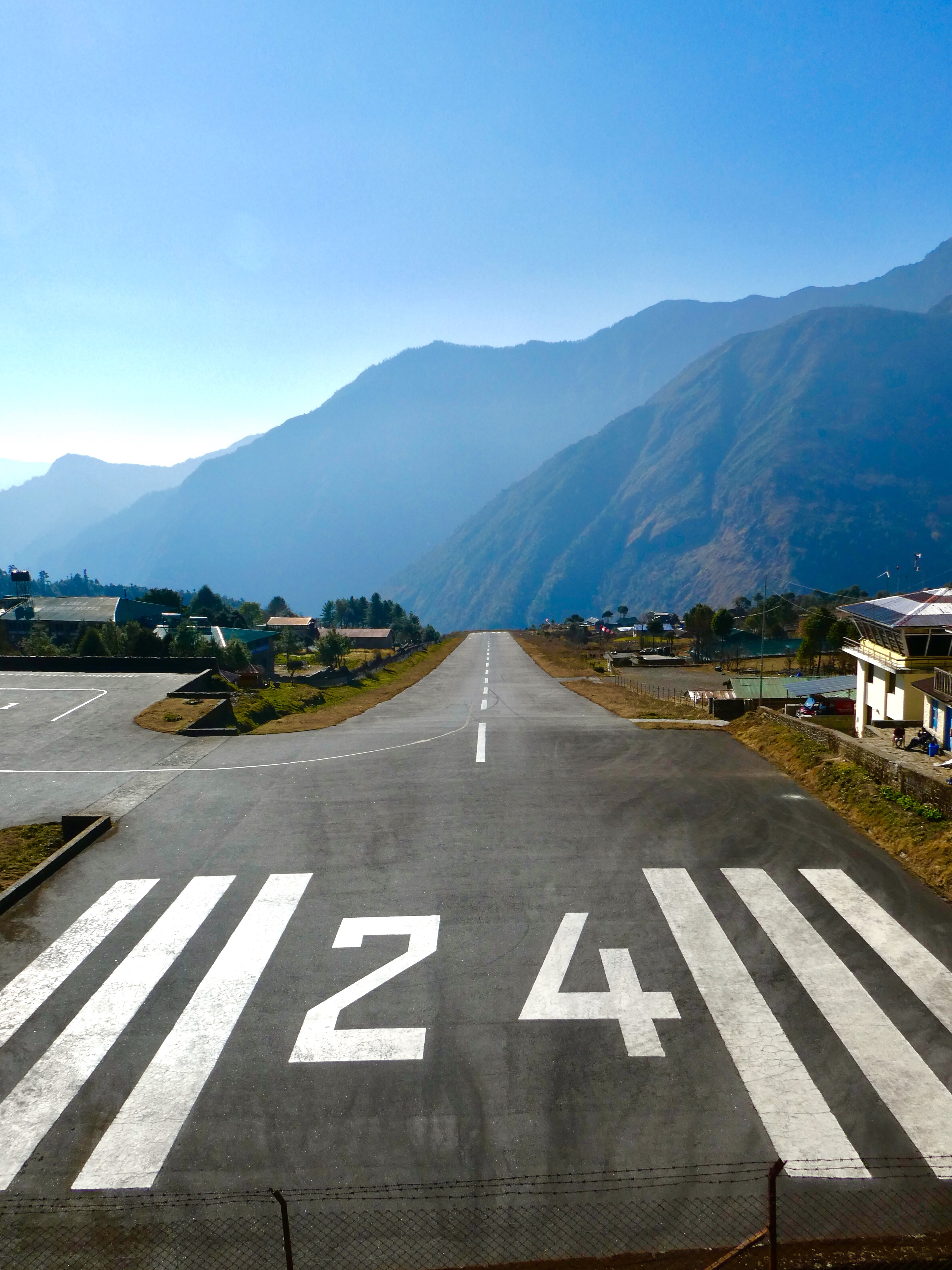 We came into Lukla, and we wanted to leave Lukla right away; it was a sore thumb that interrupted our high altitude nature excursion. Nevertheless, the stop was somewhat of a necessary one, as we needed a day off to rest and do laundry before continuing on to the alpine section of our trek.

Upon leaving Lukla, our days became slightly less painstaking, for it was at this point in the journey that it is advised to gain elevation slowly, so as to properly allow our bodies to acclimatize to the higher elevations. Though the mule trains continued incessantly, our walking times shortened to 3-4 hours rather than 8-9 hours prior to Lukla.

We were now walking amongst thinner forests with increasingly white covered peaks surrounding us.

Nights were growing colder. The climb into Namche Bazaar was still quite challenging and steep, but perhaps far more rewarding than previous ascents earlier in our trip.

Hiking along the banks of the rushing mystical turquoise waters of the Dudh Kosi River,

we eventually began a very steep ascent, which led us to a very long suspension bridge that spanned the river hundreds of feet above, adorned with white holy scarves (known as khata) and those familiar Tibetan prayer flags. This was no place for people with height phobias!

Beyond the bridge, we stopped at a point where a woman was conveniently selling oranges, and while munching away on them we were greeted to our second view of Mt. Everest. No longer a speck in a chain of mountains, we could feel the thrill in our blood as Mt. Everest appeared much bigger and closer than it was days earlier when we first laid eyes upon her. 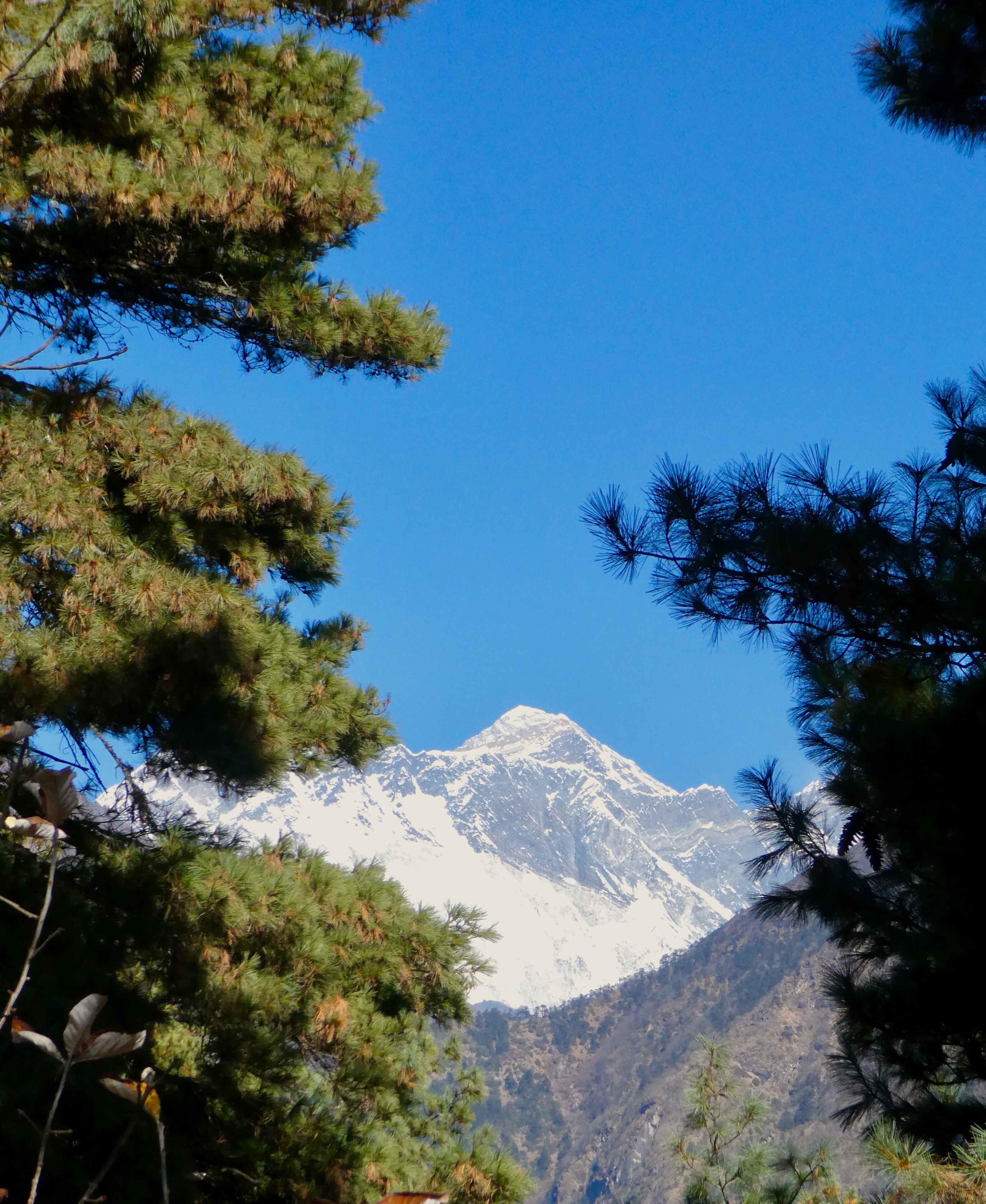 We continued our ascent, and at last we arrived at the village of Namche Bazaar, sitting at 3440 meters (11286 feet).

Larger than Lukla, Namche Bazaar is a much more beautiful village, due to its buildings which collectively sit in the shape of a massive amphitheatre built directly into the mountainside, as well as its commanding views of the surrounding mountain landscapes. 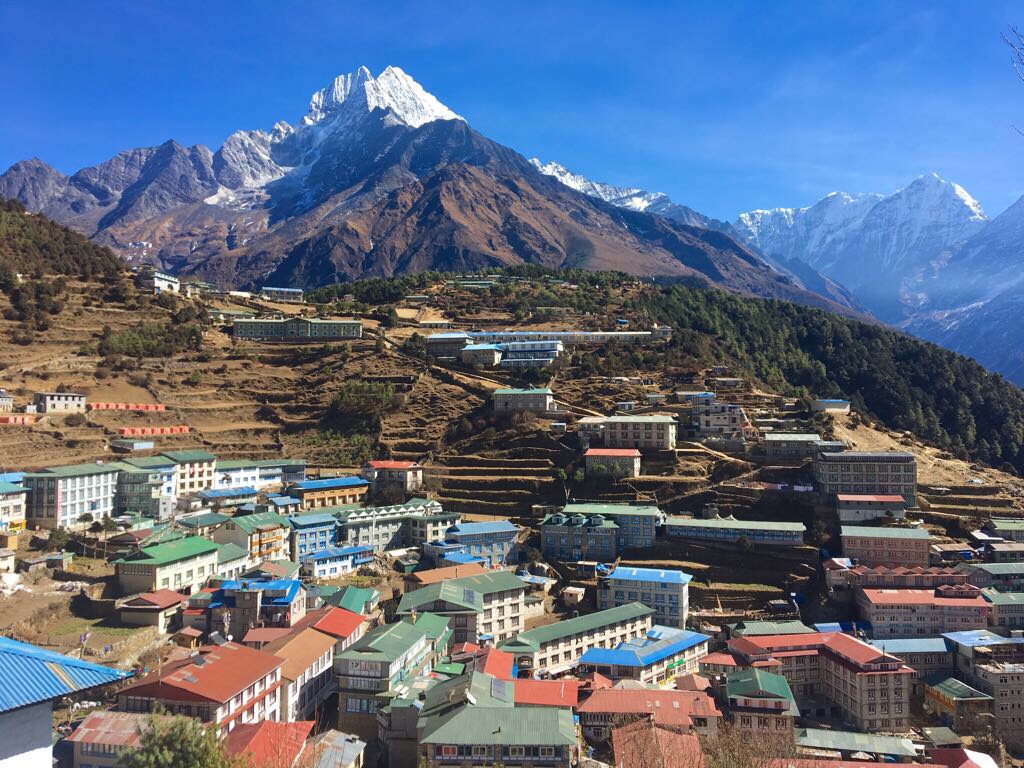 Perhaps because of its location, or maybe because the village was not adversely affected by the earthquake in 2015, there is a sense of community and foundation in Namche Bazaar which seemed to be lacking in the people of Lukla. The warmth and kindness could be seen in the younger folk who walked by in the streets holding their elders arm and arm, and it could be heard in the songs that children sang off in the distance. Music filled the air.

After we settled into our guesthouse, we entered the dining area, lined with glass windows overlooking the rest of Namche Bazaar below, which gave way to the spectacular view of Kongde Ri towering high over the village across the valley.

Our host, Chicki, was one of the three amazing Sherpa women who would cook us delicious food during our adventure, whether it was breakfast, lunch, or dinner. Middle-aged, and strongly built, Chicki possessed the qualities and attributes that are very characteristic of Sherpa people: dark skin with deep lines etched on her face, reflecting the genuine kindness and wisdom that radiated from her being.

Chicki emanated that ancient divinity that I always feel in the presence of indigenous peoples who have not been robbed of their Spirit. We could taste that kindness and wisdom cooked into each meal she prepared for us. On the wall in the dining area was a picture of Chicki and her husband in front of the Golden Gate Bridge in San Francisco. It’s a strange and beautiful thing to be so far away, only to meet someone like Chicki, who left us feeling like we were in a home away from home perched high in that amphitheatre somewhere in the Himalayas. 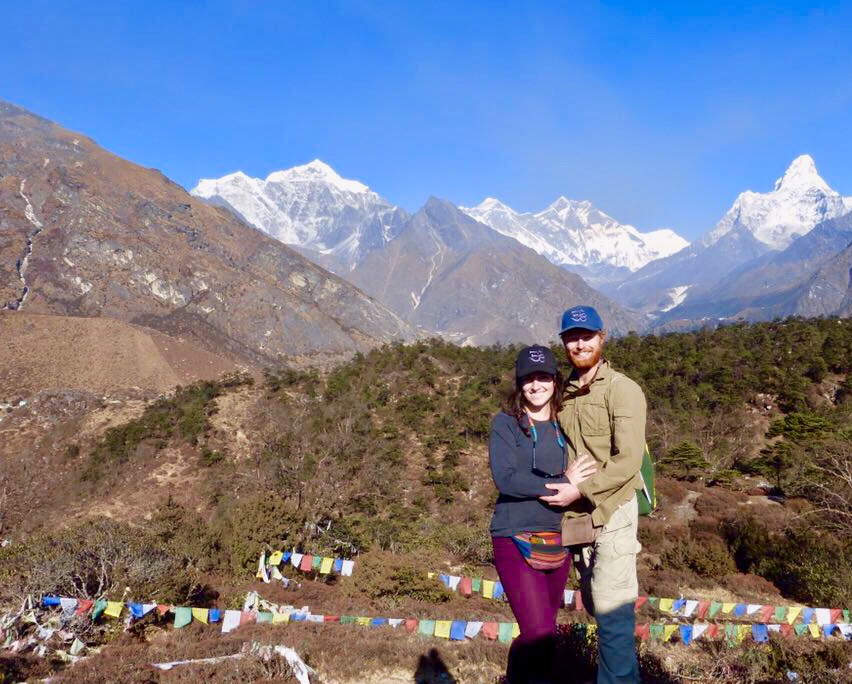 Our bellies full of nourishment and love, our clothes laundered, and our bodies very well rested, we departed Namche Bazaar after two days, fully recharged and rearing to go towards the zenith of our Himalayan adventure!

3 thoughts on “To a Bazaar Place”