So now begins the most epic part of our fantastic 21 day trek: The journey deep into the tallest of the Himalayan mountains to reach the peak of Gokyo Ri at 5,357 meters (17,575 feet). 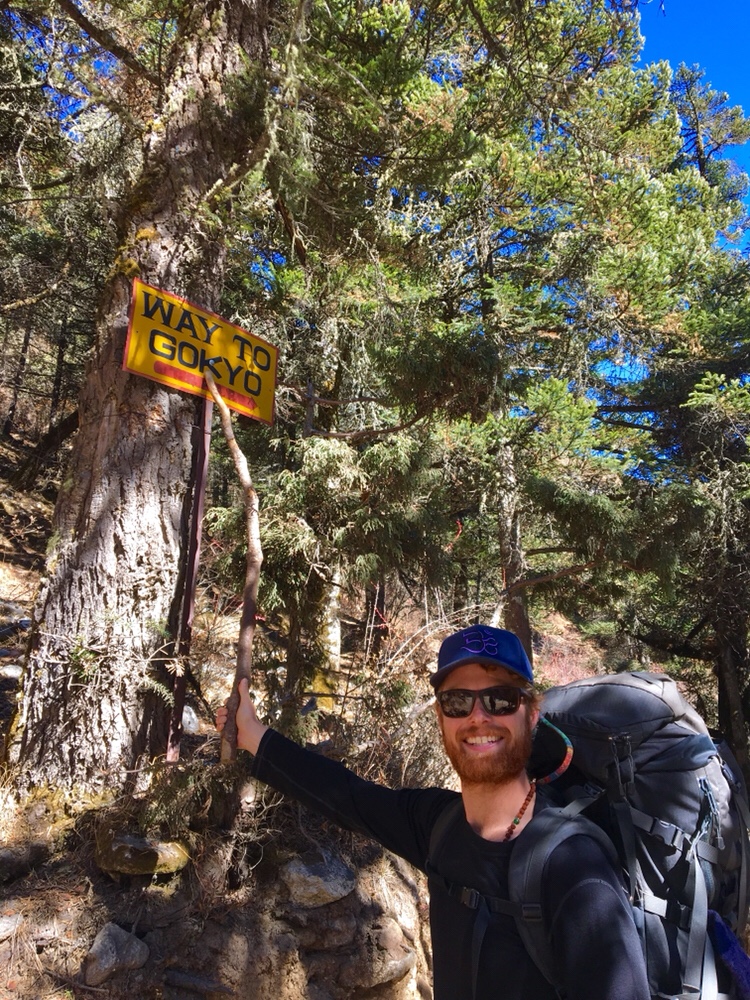 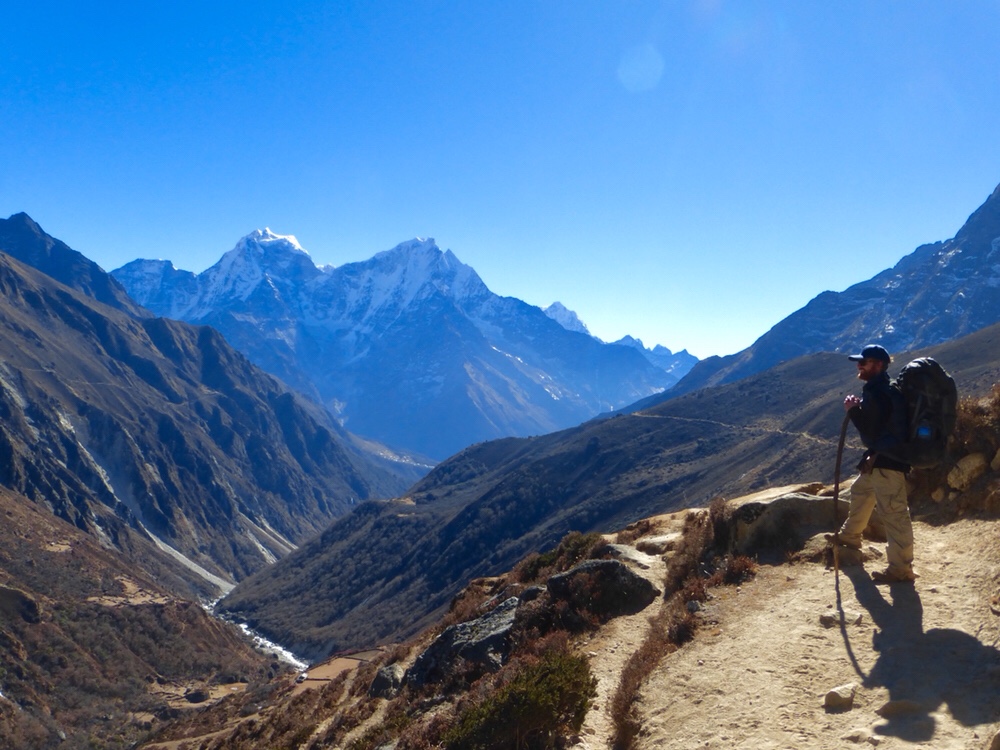 hugging the mountain side as we steadily climbed higher and higher with a view of the snow covered top of Mt. Everest peaking (pun intended) out of her hidden position among the giants behind every corner we turned.

As if blessing our journey, we were graced with the rare sighting of not one, but two Golden eagles, one right after the other. The large beautiful birds swooped down low enough for us to make eye contact with them before they gracefully flew high into the air, giving us the “ok” to proceed.

We were surrounded by enormous white peaks, dense green forests, and the clear blue waters of the rushing river, the Dudh Kosi, winding its way through the deep canyon far below.

The villages slowly began to thin out, with less occupants and structures the higher up we climbed.

Sometimes, we would go most of the day without seeing any evidence of human life except for the occasional set of prayer flags, the terrain growing more and more desolate with each mountain we passed.

We had finally reached Yak territory. With only thin, rocky pathways by which to reach the outside world, the elevation was too high and the air too thin for mules to climb.

We would now be sharing our path with a multitude of Yak caravans, delivering all sorts of supplies from gas canisters to rice, deep within the Himalayan mountains. The large, furry creatures teeter-tottered along the path, one right after the other, snarling and drooling past us as we pressed ourselves up against the inner wall of rock along the mountain edge in order to avoid a head on collision.

Though they were extremely intimidating upon our first few interactions, we eventually learned that they were just as gentle as their lowland counterparts: the average cow.

Every so often we would see a helicopter speeding past us on its way up to higher elevation to rescue the breathless trekker who had, perhaps, rushed up the mountain too quickly without giving his or her body time to adapt to the thinner air, and was now experiencing the severity of altitude sickness.

While a helicopter ride over the Himalayan mountains is quite a tempting idea, we chose to give our bodies the time they needed in order to be strong and capable of making the final climb. 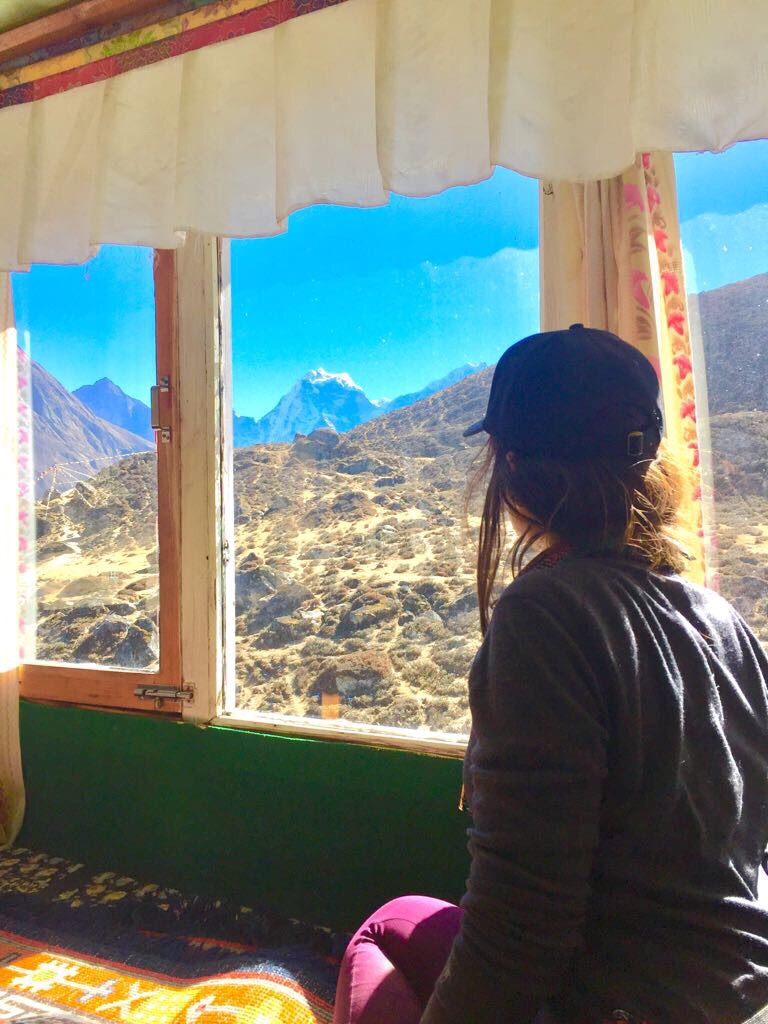 Since we were too deep in the mountains for electrical wires to reach, the small settlements in which we stayed were now powered purely by solar energy and hot showers were no longer even an option. At night, we would pile into the small, heavily- windowed common room in each lodge

to eat a hot dinner, which usually consisted of veg momos, 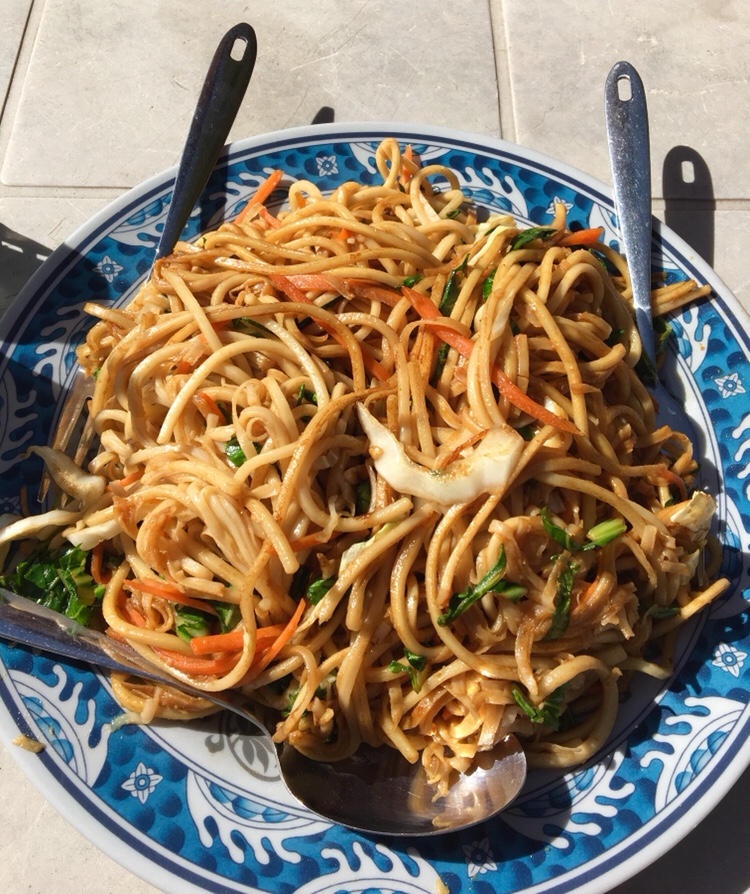 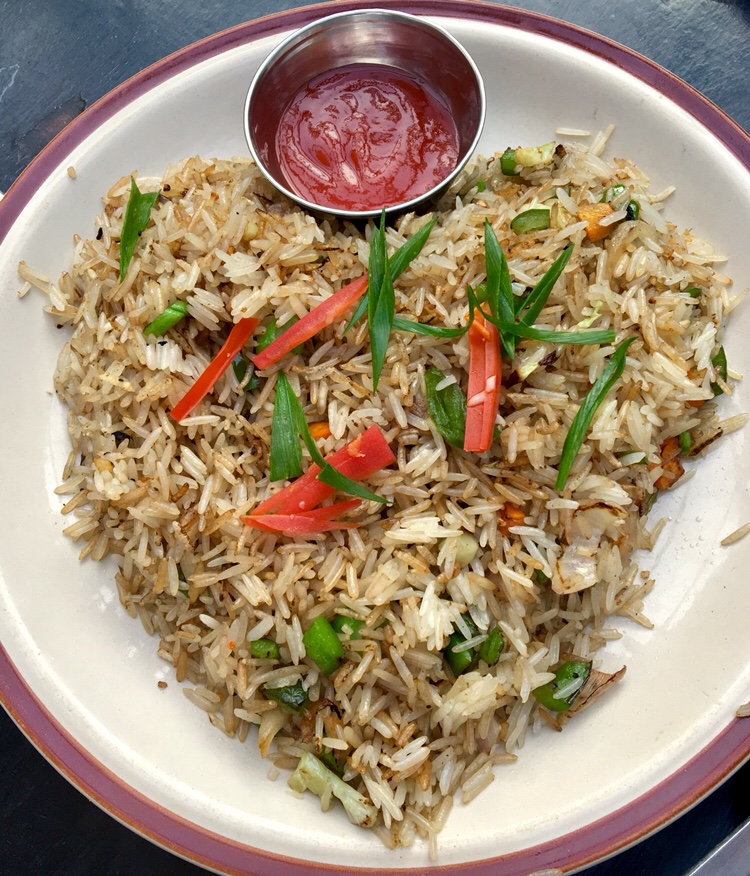 and then gather around the cylindrical stove in the center of the room that burned yak dung for heat (Yes it totally works and no it doesn’t smell at all! Its actually pretty resourceful!)

until we were so sleepy that we would run up to our small, dark, cold room and climb right into our extensively warm down sleeping bags to read our lovely Kindle Paper White E-books for a little while before crashing out for the night.

As we climbed higher and higher, the foliage began to shrink and eventually disappear almost completely, leaving behind a barren rock covered landscape much like what one would imagine the surface of Mars to be like.

Below us spanned a great valley with deep rivets carved into it in almost every direction from where the power of the glacial snowmelt river, the Dudh Kosi, clears its wide and deep pathway from the Himalayan mountains towering above. 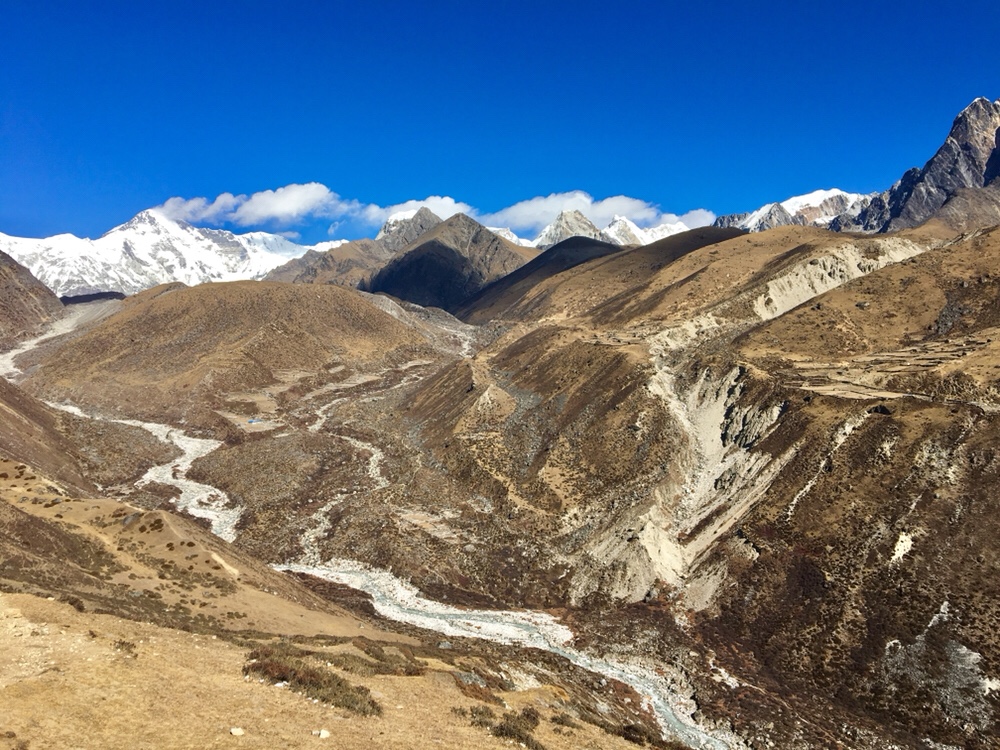 It was here that we would part away from the historic Mt. Everest trek, following a road less traveled by to witness “the most beautiful single view in all of Nepal”. 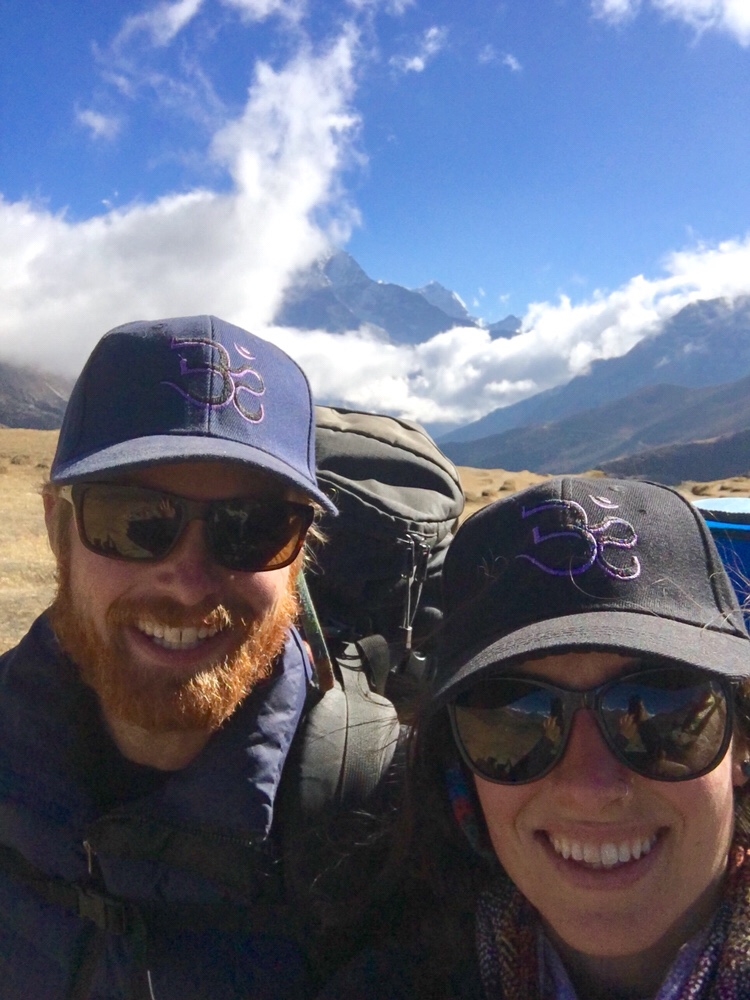 The air became thinner and thinner, the clouds moving through us and past us in quick dancing patterns.

At times, it was like being transported to a different reality where there were no other living souls and only the sound of the rushing river and shrill wind moving over the sharp mountain tops to keep us company.

The colors began to change from green and blue to shades of brown, tan, beige and grey.

Surrounded by towering mountain peaks and their shadows, we made our way up the final portion of the climb along a series of stone steps, crossed the river on a small bridge and came upon the first of the six sacred lakes that surround Gokyo, the desolate village that sits at the base of the mountain of Gokyo Ri. 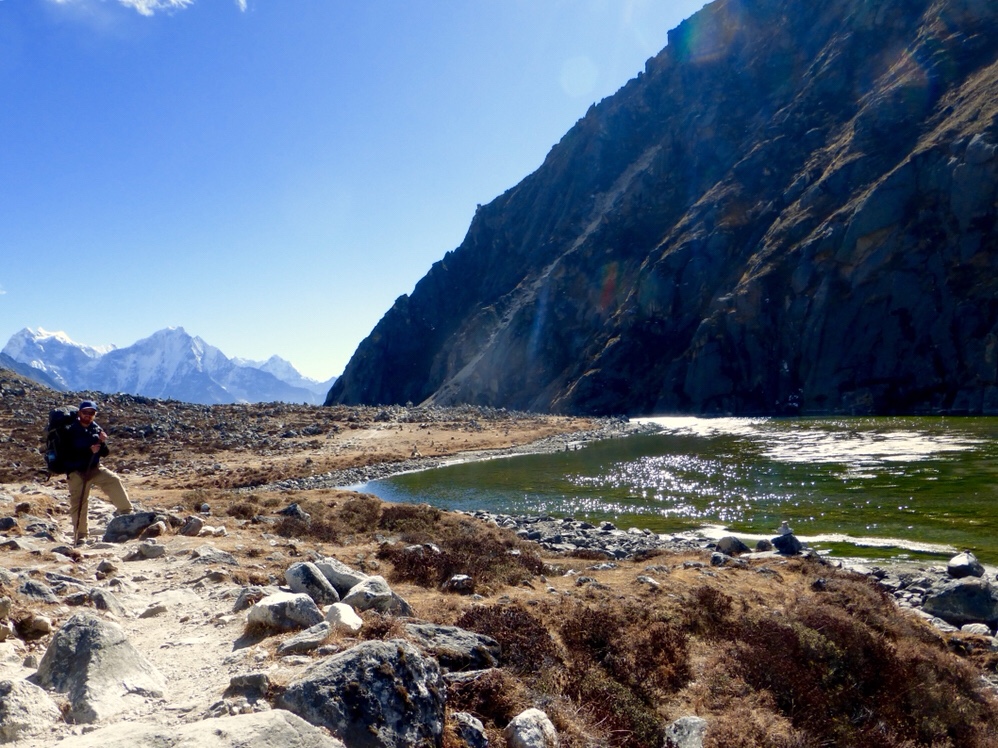 The first lake was quite small and crystal clear and we spotted some rare Himalayan ducks perched on an ice patch across the way.

Within about 20 minutes of walking, we came upon the second lake, which in its half frozen and half liquid state, was a multitude of shades in turquoise and blue.

Just as we were about to lose all of our strength and breath, we rounded the next corner and spotted quite the site to behold: Behind a large array of prayer flags strung between two poles along the path sat the beautiful and completely isolated little village of Gokyo,

one of the highest settlements in all of Nepal at 4,750 meters (15,580 feet) nestled right up to the side of the third sacred lake which sparkled in the setting sunlight in the brightest shade of turquoise imaginable,

black jagged mountain peaks surrounding it on all sides. 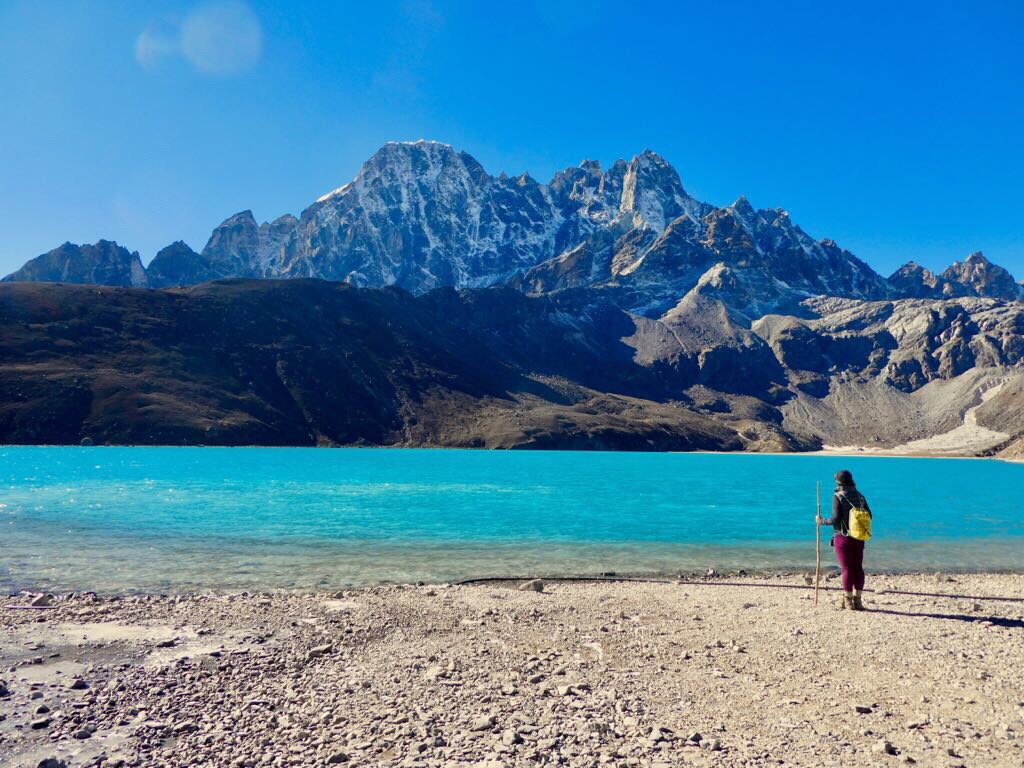 Exhausted, we stumbled into the little village and quickly found a small guesthouse right on the edge of the lake. We were lucky to score a room with large windows taking up two of the walls facing the water and the sun, which meant free heating and a of course, a breathtaking view!

We rested up and settled in, excited for the next few days of exploration in this majestically remote and secluded little part of the world.