On our first morning in Gokyo, the weather was sunny and still. 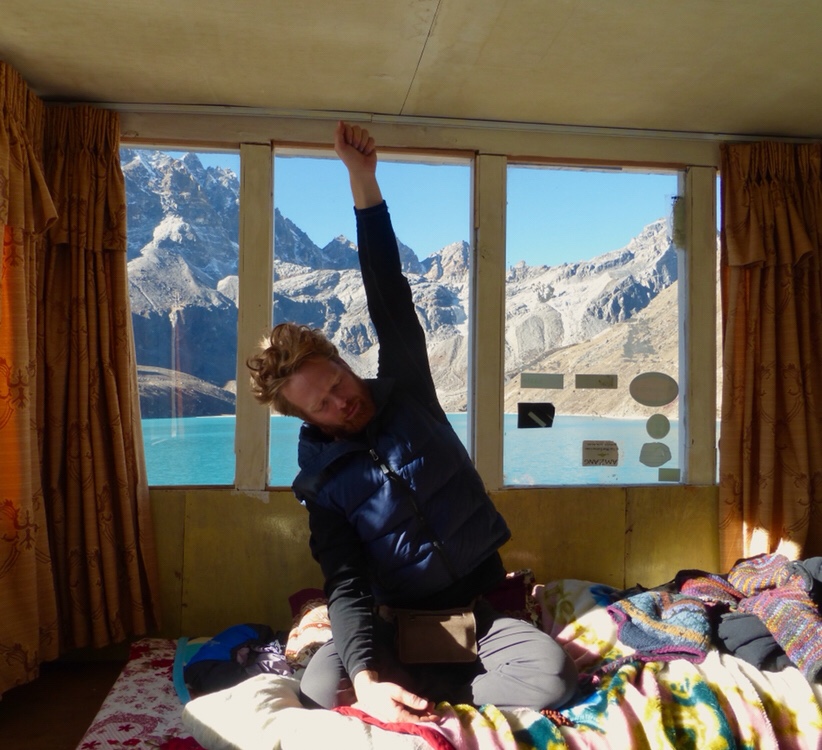 We ate our breakfast in the small common room below, surrounded on all four sides by floor to ceiling windows overlooking the turquoise beauty, as we made our exploration plans for the day.

Tibetan bread was one of our favorite things to have for breakfast. It has the consistency of a donut, but is much less sweet. We would dress it with honey or butter and eat it with our hot, spicy chai. That sunny morning, we decided to take the opportunity to climb the local peak of Gokyo Ri, where legend had it that we would be presented with the most breathtaking single view in all of Nepal.

For three harrowing and breathless hours, we climbed straight up the steep mountain side. Every time we stopped to catch our breath and look around, we were gifted with an eye-ogling view that we didn’t think could get any better—but it did, with each and every step!

We were slowly rising above the entire world as the ceiling of the planet slowly revealed its secrets to us. As we finally staggered up to the top of the mountain peak that was completely covered in prayer flags,

we were greeted with the most jaw dropping, breathtaking view we could have imagined: A 360 degree panorama of the expansive snow covered Himalayan range, a clear view of the entirety of Mount Everest and her giant neighbors,

an extensive view of the Ngozumpa Glacier, the longest glacier in Nepal at more than 36 kilometers (more than 22 miles) in length, and an aerial view of the first three sacred lakes in all their turquoise glory.

We even caught a brave and determined bride and groom up at the top taking their wedding photos! 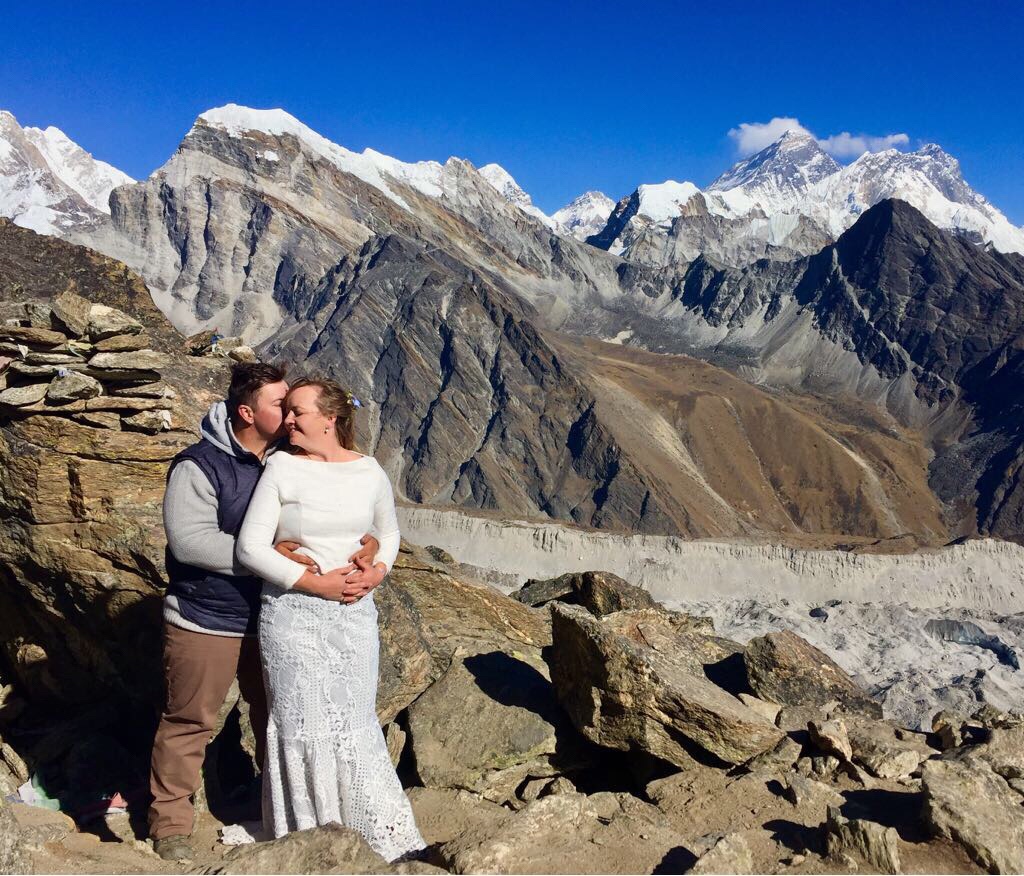 The location DEFINITELY does not get any better than this!

The next morning we decided to explore the fourth and fifth of the sacred lakes, (the 6th was very difficult to get to at this time of year and we didn’t have the proper equipment) following a path that winds its way through the rocky terrain alongside the intimidating Ngozumpa Glacier down below. 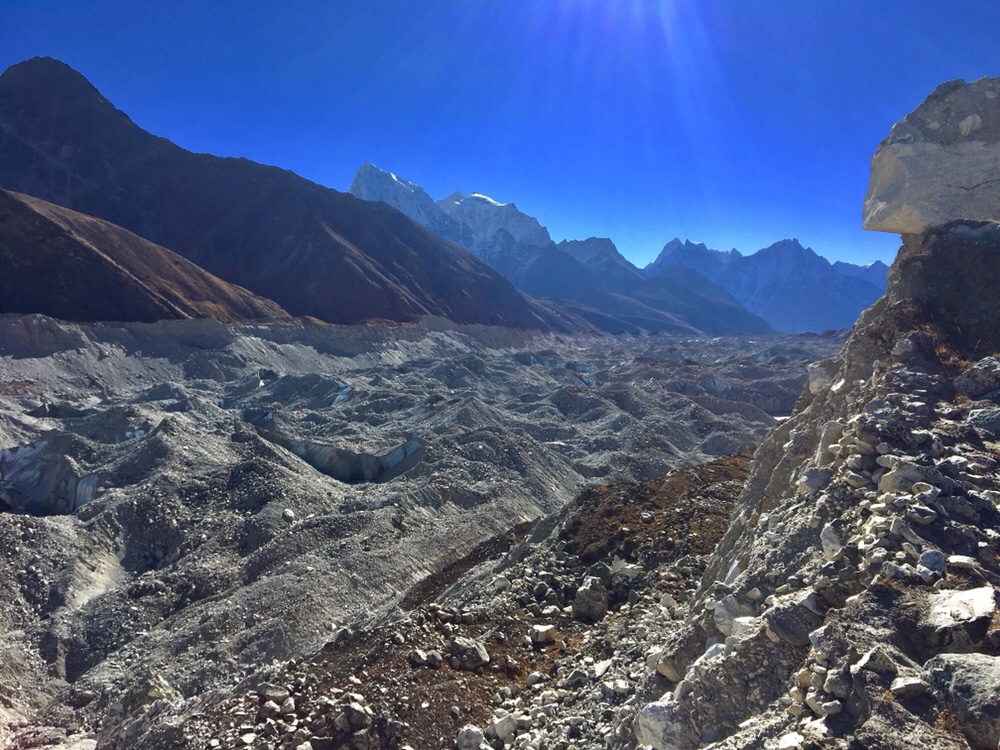 This area is so isolated and desolate that it literally feels like Yeti terrain. A Yeti is the Nepali version of an abominable snowman, and many villagers have their own stories of confrontations with one. If they do exist, this is definitely where they would live.

It felt as though we were walking to the ends of the earth, not another soul in sight, the air getting more and more frigid and wind blown with each passing hour. As we came upon the fourth of the sacred lakes, hidden behind grey jagged mountains on three sides, we began to hear a faint haunting echo.

We made our way closer to the lake and realized that the singing was coming from the frozen ice moving upon the water interacting with the wind. I can’t even begin to describe the quality of the sound coming from this lake, it was otherworldly, almost like something out of the movie The Fifth Element or the legendary Sirens living beneath the water, singing their haunting arias, drawing us into to the depths of their seduction. After our unsuccessful attempt to record the mesmerizing sound with our point and shoot cameras, we reluctantly broke the spell and proceeded along our way to the next of the sacred lakes.

The fifth sacred lake was in its own way beautiful and desolate, set at the point where the dirt covered Ngozumpa glacier made its turn into the wide open terrain at the base of Cho Oyo mountain at 8,201 meters (26,906 feet). 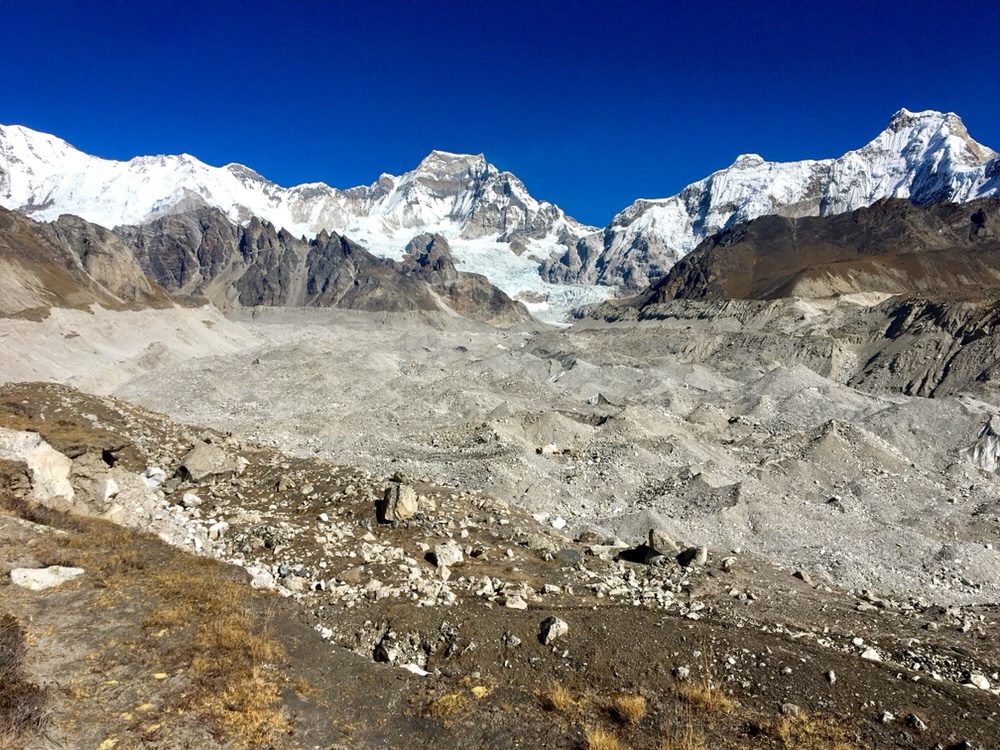 Up on the river bank, we shared a delicious lunch of biscuits and Cliff Bars that we brought from home 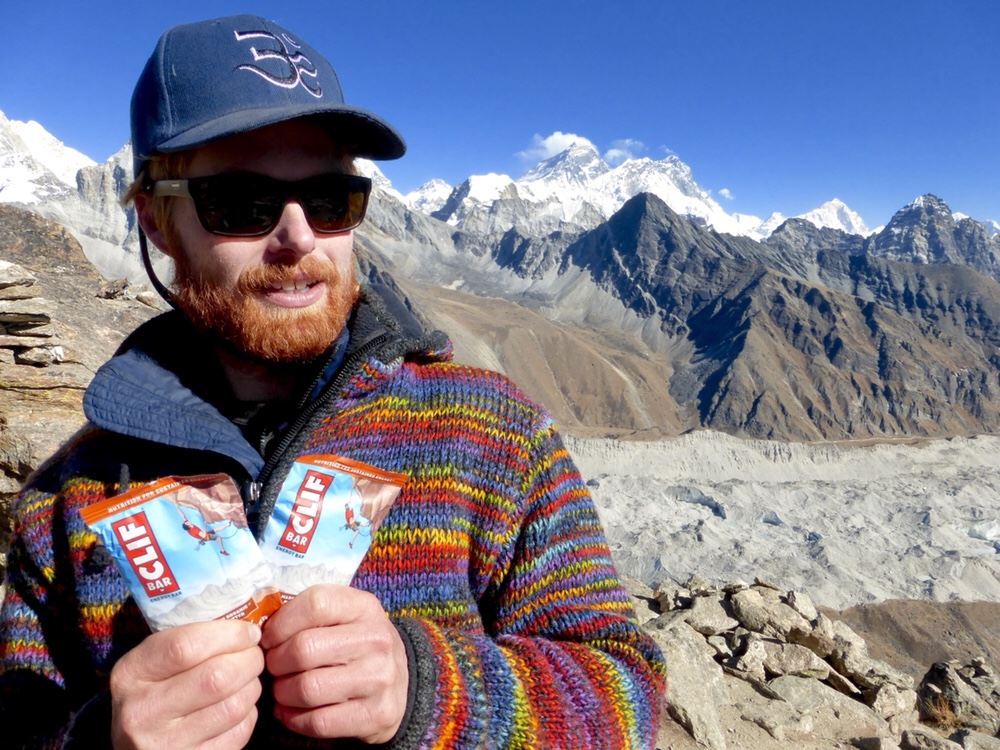 with the monstrous glacier below us and a clear view of Mount Everest in front of us.

Its not every day that you get to have lunch with Mt. Everest! Eventually, the increasing howl of the icy winds would force us to turn around and head back to Gokyo for warmth. 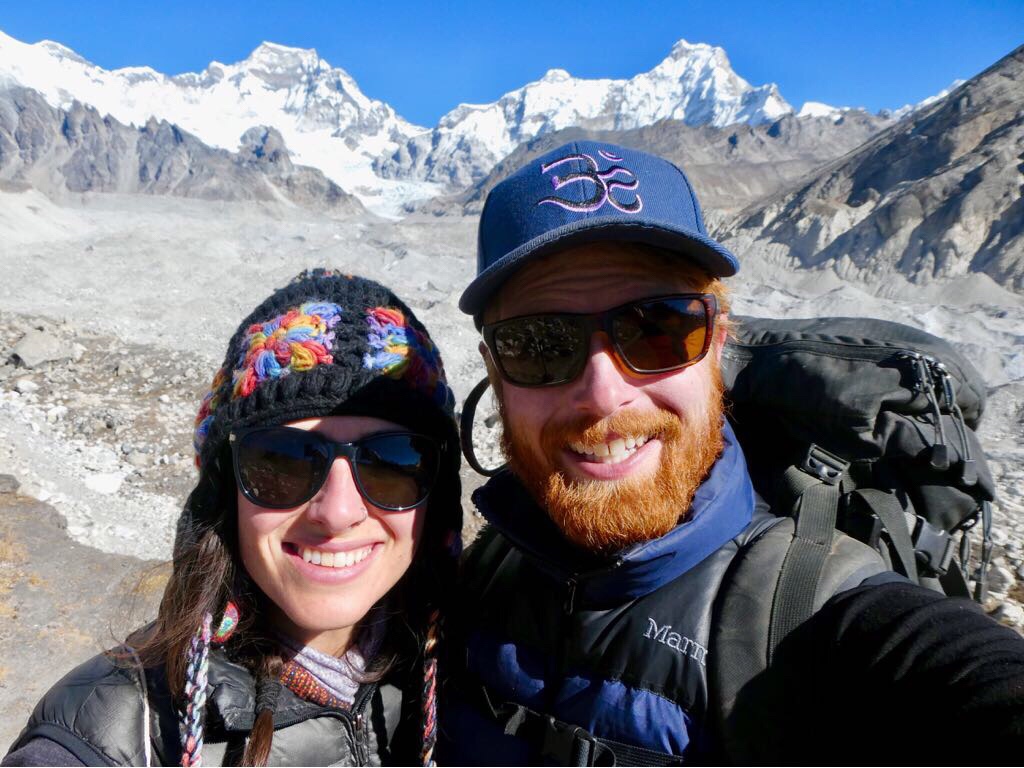 It seems as though in the most untouched of places, Mother Nature has her way of letting you know when your time is up and you should be on your way.

And then there was Dali. Our Himalayan mother; the Queen of Sherpa women. Dali is the owner of our lakeside lodge, which sits right up on the shore of the turquoise lake. And this is her yak: 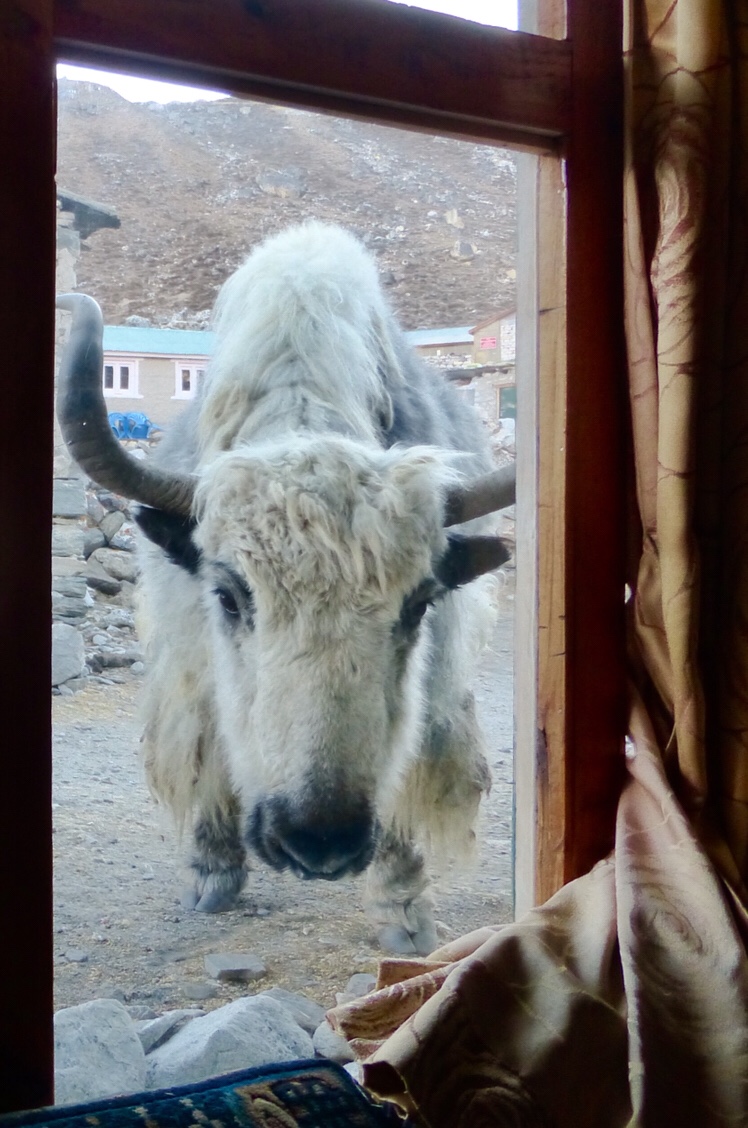 She cooks every meal and lights every fire to make sure we are all well fed, warm and happy. Dali grew up in Gokyo and has watched it change over the years.

She bubbles over with laughter and kindness and her face is filled with lines of wisdom and genuine curiosity, her eyes sparkling golden hazel in color. Dali made the best masala chai in the entire Khumbu valley. Her breakfasts were filling and tasty, and her fires were warm and cozy. She made the best Tibetan bread in all of Nepal. Her portions were generous and filled with her love. And although we didn’t speak the same language, we still managed to share a multitude of laughs. 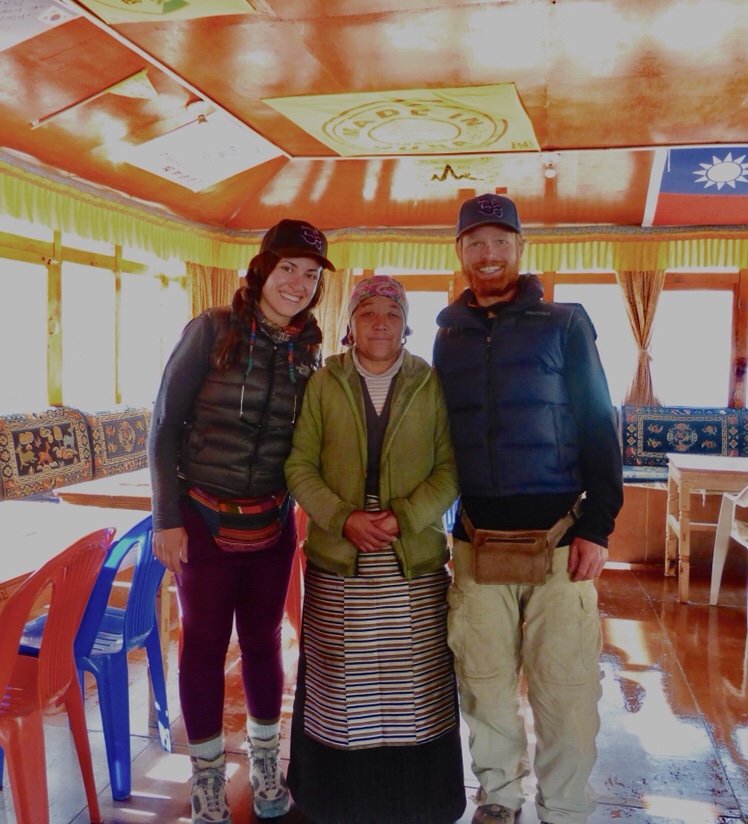 If only we could put Dali in our pocket and bring her home with us. She made our cold and windy stay in Gokyo feel just like home.

Trekking in this region of Nepal is not usually recommended in December as the snow and wind can pick up at any minute to begin the winter season, leaving the environment frigid and unwelcoming. We were lucky enough to have perfectly clear sunny days the majority of our time. However, on our last two days in Gokyo, the weather started to take a turn for the icy cold.

During the night, the powerful wind would howl over the sharp mountain peaks and through the little valley of Gokyo, banging on the windows as if someone was trying to break their way in. In the day time, the wind added a bone-chilling element to the otherwise sunny weather, and although we were bundled up in all of our warm clothing, the cold would still seep its way through. Feeling accomplished and exhausted after a full three days and nights, we packed up our bags and decided to leave the windy, icy-cold beautiful valley of Gokyo Ri. 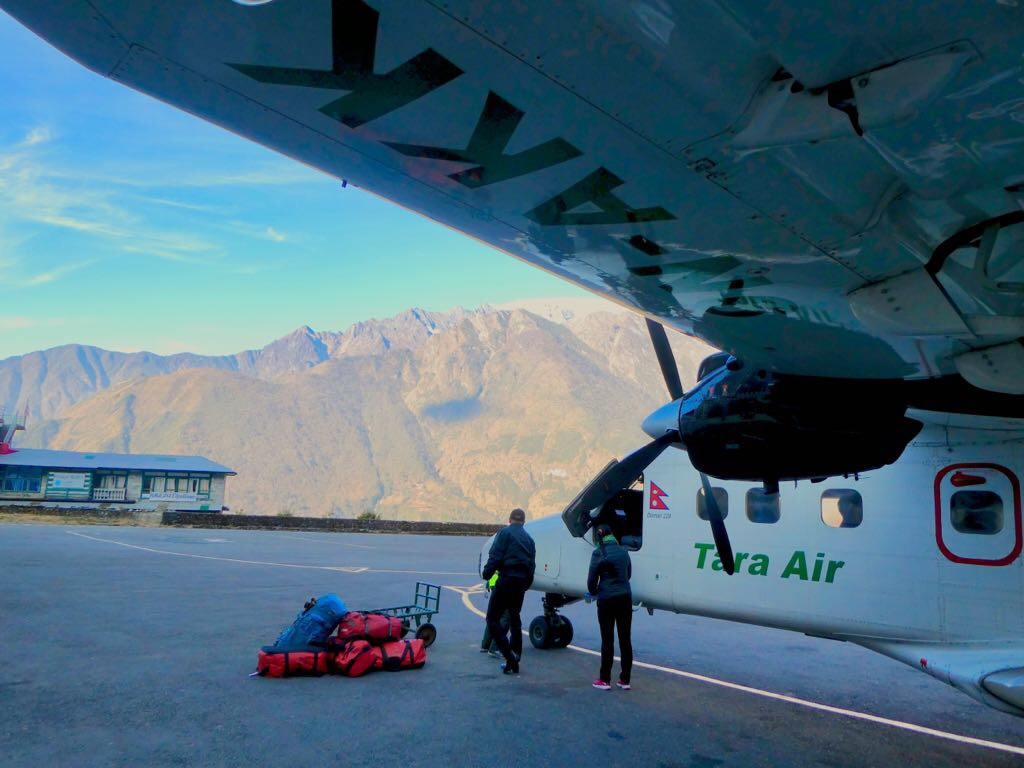 to shakily take off on the most dangerous runway in the world with the open cockpit in front of us and Jo Trekker right beside us.

Although we may have many other adventures in our lives, we will never again be on top of the world quite like Gokyo Ri.

We are unbelievably grateful to have gotten the chance to experience such epicness and completely overwhelmed by the beauty and the magnificence of both the people and the landscape of the Khumbu Valley region of Nepal. 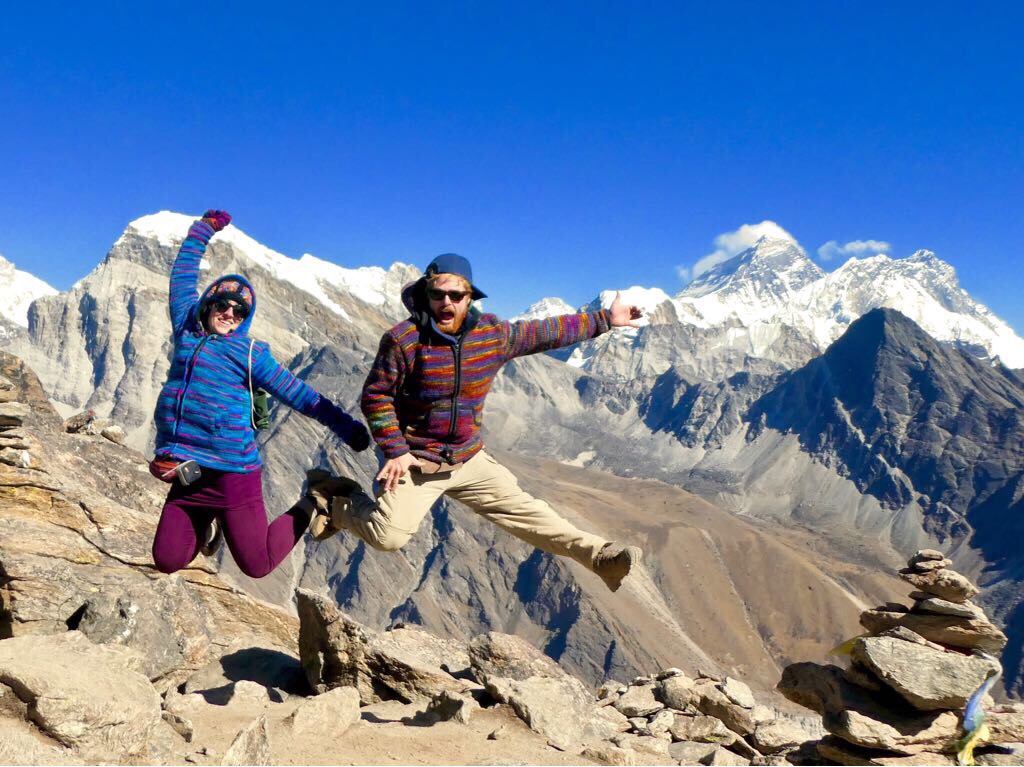 5 thoughts on “The Ceiling of the World”